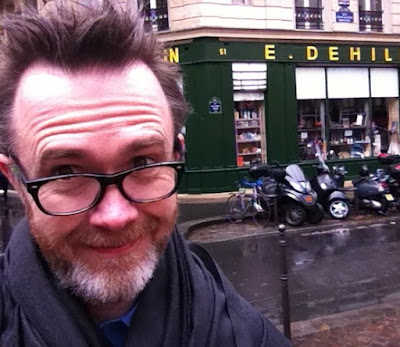 The guy pictured above is Rod Dreher. Dreher was profiled, recently in The New Yorker. He writes a daily blog under the title, "The American Conservative." According to that New Yorker profile, Dreher's blog gets about a million page views a month.

I, too, write a daily blog. However, I have NOT been profiled in The New Yorker. In addition, I would definitely not qualify as an "American Conservative." The 90-plus people who are signed up as followers of my blog can testify to that!

After having read The New Yorker profile, and in the spirit of trying to bridge the yawning chasm of extreme partisanship in our country, I signed up to follow Dreher's The American Conservative blog. That's how I was able to capture the above picture of Dreher, published under the title, "Black Like ... Me?"

Dreher's blog also used the phrase I have commandeered for the title of my own blog posting, today: "Say It Loud, I'm Black And I'm Proud."

Just to be clear, my title doesn't give the full text of what Dreher said in his blog. Adding to the quote I used, Dreher added just one more word, a word that kind of undermines the "solidarity" message that might otherwise have been implied. Dreher's construction reveals, I think, his deep south upbringing and justifies that "American Conservative" title:

That "Heh" tells me that Dreher doesn't exactly revel in the idea that he may have some African American ancestry, which is what his May 27, 2017, blog posting was all about.

I think the way Dreher writes out, "Black Like...Me?" conveys the same dissociative message. Dreher's effort to disassociate himself from the Black ancestry he has discovered, is also found in how he tells the story of what his 23andMe genetic test told him:

The genetics timeline indicates that five to eight generations ago (the test can’t be more specific), I had an ancestor who was 100 percent West African. That ancestor was likely born between 1700 and 1820. That means he or she was a slave. Because African slave males did not generally mate with European females, that means that my African ancestor was almost certainly female. So, great-great-great-great-great-great-great grandmother was probably a slave woman ... I’m guessing that that woman’s child passed as white, and married a white person, and that couple’s children married whites, and on and on.

The test also found that a little farther back on the family tree, I have an ancestor who was 100 percent Native American. Given the time line, this probably means that one of my European ancestors during colonial days married a Native American woman, as happened back then given the relative shortage of European women in North America at that time.

This is amazing information....


Here is where I really quarrel with Dreher. The information that Native American and African American genes are part of our common genetic legacy in America is NOT "amazing." It's the fact of who we are, and if we could all just get over the "Heh" factor, maybe we could start treating each other like the brothers and sisters we actually are.