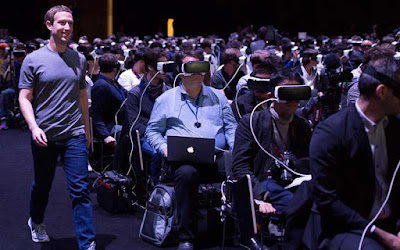 On April 19, 2017, the "Business Report" section in the San Francisco Chronicle carried an article by Benny Evangelista and Marissa Lang that explored Facebook's new plan to "shift to virtual worlds [and] artificial intelligence."

The plan was unveiled at Facebook's annual conference for software developers, called F8. That's "Fate" when you speak it out, and arrogant tech types do seem to believe that they can put fate under their personal control.

Since the Chronicle tends to block out online information if you are a non-subscriber, the link above may or may not work for you. Here is an excerpt from the article I have linked, quoting a part of the article that I thought was of particular interest:

Facebook will test a program using the camera function in mobile apps like Messenger to create augmented reality images. “If your daughter is a big Harry Potter fan, on her birthday, you can turn your home into Hogwarts,” Zuckerberg said....

World Lenses will act as an interactive and responsive filter that can be superimposed on a camera view. Filters will add 3-D objects into a scene that Snapchat users can interact with. Facebook’s camera will have similar capabilities, according to Zuckerberg’s keynote address.

Snapchat’s new filters will allow users to scatter virtual seeds and watch flowers sprout or spread a bright rainbow over a scene. Words like “love” can be added and animated by moving them on the screen or putting your hand out and grabbing hold of them, virtually, in the camera’s view.

Zuckerberg showed a photo of himself wearing an augmented-reality Nike headband.

“As silly as these effects may seem, they give us the ability to share what really matters on a daily basis,” he said.

I do NOT believe that it's my fate to experience the world, in the future, by donning goggles, a new kind of eye glasses, or even to be wired directly to a computer (brain to computer without additional hardware), as Mark Zuckerberg says is coming.

Check out that picture. Who is walking around in "real" reality? Who is experiencing that "augmented reality" that Facebook wants to promulgate, to "share what really matters on a daily basis?"

Can you spot the billionaire? Does that tell you anything?