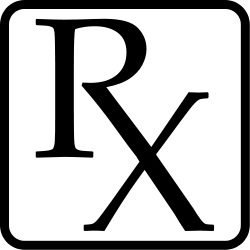 Recently, I ran across a question/response on Quora that provided me with some information that I should probably already  have known about. The information provided, however, was new to me. Here was the question:

What does the symbol ℞ in medical prescriptions stand for?

Below is the answer, provided by Vivienne Marcus, who says she "got a medical degree once." Her Quora profile describes her as "a plastic daffodil in a Grecian urn."

First, it isn't the letters "Rx," she says. That's just a common shorthand for the symbol shown at the top of this posting.


What you are seeing is a capital Roman letter R, which stands for recipe, the imperative form of the verb "to receive" (from which comes the word recipient). In other words, the symbol is a command, meaning in effect "take this." The symbol itself dates from medieval times, and has come down to us to signify "prescription" and sometimes even "medicine" in a generic sense.

The crossbar across the leg of the R is more mysterious. I was told it is a letter I, standing for Jupiter, king of the gods, and that the command means (basically) "take this and God help you." The astronomical symbol for Jupiter is reasonably similar, especially if you tilt it a bit:

So is the Egyptian symbol known as the Eye of Horus. In both of those symbols you can see a hint of a connection:

I was personally happy to learn about that "Eye of Horus" thing, because that is pretty much the symbol that Bob Dylan often displays at his concerts, and I never did know what it meant.

I also liked the explanation for Rx, meaning, "Take that, buddy! (And good luck to you)!" I'm thinking that this is, actually, a symbol that could be useful in a lot of contexts, not just in connection with a medical prescription.