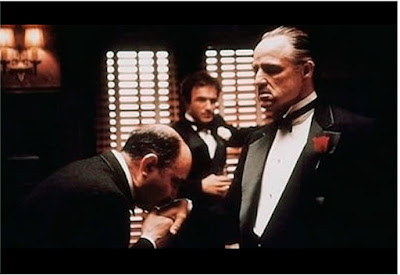 Since today is Inauguration Day (click the link for a schedule of events), let me suggest that this would be a good time to go back and read an article published in The Concourse, on January 11, 2017. The title of the article I am recommending, by Senior Writer Hamilton Nolan, is "This Is Why You Don't Kiss The Ring."

I think Nolan would probably have given this advice to characters in  The Godfather, who might have been asked to kiss the ring of Vito Corleone, the fictional leader of a gangster family. In fact, however, Nolan's advice was actually directed to all of us, and with reference to a non-fictional leader, namely, the person who will be inaugurated today as the President of the United States:


Our society and our institutions are simply not set up to deal with someone who is fully prepared to flout all of our norms of good behavior. Our system, to a large degree, relies on social sanction rather than laws to prevent powerful people from getting too far out of line. When our most powerful person is willing to ignore all of that, there is not much in place to stop him. The normalization process is well underway. The pomp and circumstance and deference will only increase after the inauguration. The press and the Congress are the only two institutions standing between a dangerous man and total power. They must both realize this is not the time to salute and grovel. This is not the time to fall into familiar patterns of default respect for someone who does not himself respect the responsibility to the public that he has been given. This is the time for them to rise to the occasion. And the occasion is a fight for civil society.

On January 11, 2017, the day Nolan's article appeared, my posting in this blog was titled, "They Are Not Your Daddy And Mommy." I was writing about a President who presents himself as an extremely decent and admirable man, and as a dedicated and worthy national leader. President Obama is someone pretty much the opposite of the person about to take the Oath of Office today.

The point of my earlier blog posting, though, is really the same point that Nolan makes in his article.  As I said then:

The relationship between citizens and those who have been elected to represent them is a power relationship, and WE, as citizens, need to remember who is supposed to have the power - and who does have the power, if we are willing to mobilize it.

Citizens should never consider themselves subordinate to anyone, and it is we, not our institutions, like Congress and the press, who must ultimately stand between office holders and "total power." The power belongs to the people. Let's not forget it.

Citizens don't kiss rings - No matter who the President is.