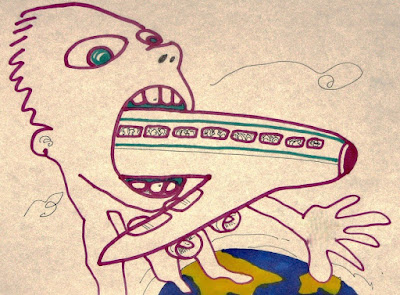 The Urban Dictionary is my go-to place for the latest definitions of colloquial expressions. TMI, for instance, is defined as follows:

Too Much Information - way more than you need/want to know about someone.

John: I have mad chafing on my balls.
Frank: uh, TMI

I tend to think that the TMI designation is applied, mostly, to information relating in some way to illness or sex (or maybe both, as in the example above). In addition, as the Urban Dictionary suggests, it seems that the "too much information" response is prompted when a listener has been provided with too much information relating to a specific person. TMI is when you are told "way more than you want to know about someone."

Maybe there is a more generalized type of TMI, too. We may well be suffering from a "pure form" of TMI. We just have "too much information," period!

The age of the Internet certainly facilitates the TMI phenomenon, considered as a general condition. With a few simple keystrokes, you can find out about anything you want, virtually instantaneously, and can also find out what almost everyone else in the world thinks about the subject. Incidentally, I recently came across a set of helpful instructions on how to use Google Search. Click to review. These instructions will help you get the most information you possibly can when you launch a search request. If we are going to have TMI, let's be sure we get everything!

Anyway, I think it's worth considering whether we are getting "too much information," even when we don't go looking for it. If you share my suspicion that this might be true (I'm offering up, as an example, the abundant new information we learn each day about Donald Trump), you might well have concluded that we are simply drowning in way more information than we need or ought to want.

In this post-Trump Election period, I have had an almost constant, bloated, TMI-kind of feeling about the information that seems to be coming in from every direction about our president-elect, and about our politics, and about our likely political future. I hear about Trump's cabinet picks, his family, his latest tweets, his business triumphs and disasters, and many other topics related to all of the above. HUGE volumes of information are forthcoming. A common reaction is a combination of both nausea and fearfulness. It's not a good situation.

Luckily, I think I have found a way to confront and overcome the noxious effects of the Trump-TMI to which we are all being exposed. My method makes use of a metaphor first advanced in our modern era by Isaiah Berlin. Wikipedia describes Berlin as "a Russian-British social and political theorist, philosopher and historian of ideas ... an essayist, conversationalist, raconteur, and lecturer." Among his most popular writings is an essay titled, "The Hedgehog And The Fox."

Berlin begins his essay with these words:

There is a line among the fragments of the Greek poet Archilochus which says: "The fox knows many things, but the hedgehog knows one big thing."

My use of this fox/hedgehog distinction is a bit different from the use Berlin makes of it, but I think it's fair to equate the "many things" that the fox "knows" to the kind of generalized TMI I have been talking about in this blog posting. We can get distracted by the "many things" we have learned in the weeks since November 8th, and those "many things" are making us fearful and distressed. At least, that's my observation.

We do not, however, have to approach our politics from the perspective of the fox. And we shouldn't, either, if it's making us afraid and sick. Let's think about the hedgehog perspective, and not forget the "one big thing" that all Americans know. We have had a functioning democracy in the United States since about 1776, and ours is a government of, by, and for the people. Nothing has changed. Remember that "of" part!

As we learn ever more about our president-elect (TMI), the "many things" we are learning, that tend to make us sick, should not be allowed to do that. Our presidential election seems to have given us a President who is irresponsible, untruthful, narcissistic, and so many other things (none of them positive) that we learn about daily. Yes, we seem to learn more and more each day (and almost all of it distressing). It's simply TMI.

My advice is to act like the hedgehog. Let's not forget the "big thing."

The big thing is that we aren't about to lose self-government unless and until we fail to get involved in government ourselves - and the election of an untruthful narcissist as president doesn't negate this truth.