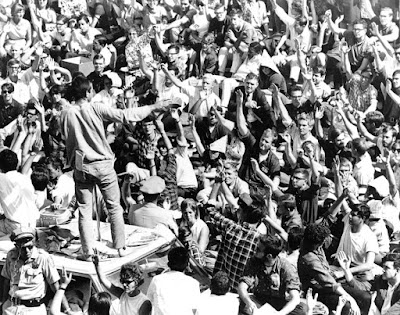 In Santa Cruz County, the FAA has been in the news. In that context, FAA means the Federal Aviation Administration, which is what that FAA acronym means to most people.

An article in the Santa Cruz Sentinel, on December 6, 2016, discussed a recent debate at the Board of Supervisors about how best to get the FAA to revise flight plans into the San Francisco Airport, to reduce or eliminate noise impacts in Santa Cruz County caused by flight path changes implemented by the FAA without any local hearings or any effective advance notice.

Supervisor John Leopold, who represents the First Supervisorial District on the Santa Cruz County Board of Supervisors, has been leading the charge on behalf of the County on this issue. If you'd like to know more, or get involved, you could contact Supervisor Leopold, or you could get in touch with Save Our Skies, which goes by another well-known acronym, SOS.

I do know about the Federal Aviation Administration (FAA). I worked for the FAA, in fact, as an intern in their law library in Washington, D.C., during the summer of 1968. What I didn't know until I went to that Santa Cruz 4 Bernie meeting held at the Louden Nelson Community Center on Tuesday, December 6th, is that there is now a new FAA in the making.

At the meeting at Louden Nelson, two students from Harbor High School made a presentation to the 250 people in attendance, and announced the creation of a new group at their high school.

Now, that is an FAA that I can really get behind! The crowd at the Louden Nelson meeting liked it, too.

If you'd like information about this exciting new FAA initiative at Harbor High, I suggest that you send an email to Santa Cruz 4 Bernie. I bet the "Our Revolution" activists there can get you in touch!