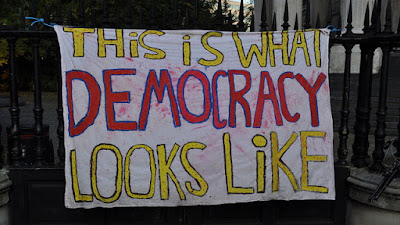 When I went to bed last night, I pretty much knew what I would find when I woke up this morning. And I was right. When I checked my computer at 5:30 a.m., I found that Donald Trump has won the presidential election, in terms of electoral votes, though not in terms of popular votes, and that Donald Trump will be the next President of the United States. This is what ABC News calls a "stunning upset" of Democratic Party candidate Hillary Clinton.

In Santa Cruz County, the local election results published by the Elections Office said that 73.99% of the voters in my county voted for Hillary Clinton for President. I was definitely one of those Clinton voters. In California, according to the Secretary of State's online results, 61.5% of the voters voted for Hillary Clinton. Trump won anyway. Voters elsewhere did not agree with California's judgment.

According to Leon Panetta, former head of the C.I.A., speaking at the Democratic National Convention, Donald Trump "can not become our next commander in chief." I do not agree with Leon Panetta. In fact, I am writing this morning, more than anything else, to combat the idea that because Donald Trump has been judged "unfit" to be President, by those who have led the Democratic Party, that he "cannot" be President.

Donald Trump can, and I trust will, be President. To appropriate a Bernie Sanders' slogan from the Democratic Party primary, "this is what democracy looks like." First we have the debate, the conflict and the controversy, and then we count the votes, the electoral votes, in this case. The person with the most votes wins. That is what democracy "looks like." If we don't follow those rules, then we don't have democracy at all.

"Instant" analysis is always suspect. So please remember that, as a caution, as you read my own "instant analysis" of this election, right here. I believe, based on the presidential campaign that has just ended (and particularly from my own personal experience in the Democratic Party primary election), that the majority of the American people are demanding significant change, and that they profoundly distrust the governing elites (of both parties) who have been in charge of this country for the last 25-30 years.

Hillary Clinton is a worthy person, but she did not launch her campaign for the presidency by speaking out for fundamental change. In the Democratic Party primary, Hillary claimed the nomination not on the basis of any new program of  political change, but on the basis of experience and (may I say) entitlement. In the general election campaign, the essence of the Democratic Party message has been that the Republican Party candidate is "unfit," and a "deplorable" person.

In many ways, I agree with that judgment, but if I am right, and the voters have been insisting, right from the start, on the need for fundamental political change, the argument against Donald Trump, based on his personal characteristics and suitability for office, was a particularly weak argument.

Ironically, with all the pre-election speculation about how the Trump candidacy will, perhaps, destroy the Republican Party (speculation that may still prove accurate), it is clear to me that it is the Democratic Party that will have to be torn down and rebuilt, if it is going to survive at all. What the Democratic Party has proven, in this election, is that the Party leadership completely missed the demands of the voters for fundamental political change, for what amounts to a "political revolution."  Because of this misjudgment, our nation is now exposed to incredible danger, as we have voted to turn over Executive power to a person who seems uniquely unsuited to serve as our Chief Executive.

I am hoping that those committed to a different kind of political change from the kind likely to be delivered by a President Trump and a Republican Party Congress, will now regroup, and begin immediately working for the kind of "political revolution" that we truly need, one targeting the obscene income inequality that is siphoning off the benefits of our immensely successful economy to the top 1%, that has been dodging and weaving on the global warming challenges that are putting the continued existence of human civilization in peril, and that have been leading our nation ever deeper into the path of destructive militarism.

A friend has already written me this morning, to quote Salena Zito, who has said of Donald Trump that "the press takes him literally, but not seriously; his supporters take him seriously, but not literally." I hope that this judgment, attributed to Trump's supporters, is accurate, and that a President Trump will seriously seek to lead the nation to what I am certain that the voters actually want. See above for that!

Whether President Trump does that, or not, WE, those who did not support Donald Trump, must now take up our own obligation to be "serious," and to win back the right to provide the political leadership that this nation so desperately needs.