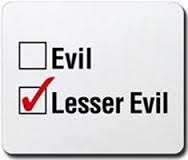 I went to the Democratic National Convention in Philadelphia last July, as an official delegate for Bernie Sanders. I was an alternate. I wrote about the Convention at length, here in this Two Worlds blog, and I wasn't very happy about the way the Convention was conducted. I did six different blog postings from Philadelphia, and I invite anyone who hasn't read them already to go back and take a look at my contemporary comments. My final post can be accessed right here.

As a delegate for Bernie Sanders, I was naturally disappointed that he didn't get the Democratic Party nomination. Other delegates for Bernie Sanders felt the same way, and there has been a fair amount of debate among former Sanders' delegates about whether or not to support Hillary Clinton. On that question, I'm with Bernie. He's voting for Hillary. I am, too. Other people have different views, and some of the debate can be sampled in this recent article from In These Times. The article is titled, "Up For Debate: The Lesser Evil."

I have a comment about "The Lesser Evil" concept. I think it is profoundly wrong to import the categories of "Good" versus "Evil" into a discussion of politics. It's misleading. Those categories are "religious," not "political."

"Evil" should be avoided (evil actions, evil thoughts). Big or little, greater or lesser, it is never right to support or vote for "Evil."

Again, though, "Evil" is a religious category. In politics, which is essentially a process of collective decision-making, the whole point is to have debate and discussion, conflict and controversy, and to resolve those debates by a decision that is often a "compromise." In this process, the category of "Evil" doesn't really fit. How can you compromise with something that is "Evil?" You really can't. While I feel strongly about my political views, I don't claim that those who hold different views are "Evil." If I thought that, how could I even talk with them?

Hey, meet the United States Congress! There's an example. That body of elected representatives is supposed to be debating and then deciding what we, collectively, as a nation, should do. But members from both parties are treating each other like they are "Evil." Naturally, nothing can be, or is being, accomplished, and when a democratic process no longer "works," when democracy can't make decisions, totalitarian solutions emerge.

The In These Times article poses the question whether Bernie Sanders supporters should vote for Jill Stein, the Green Party candidate for president, instead of for Hillary Clinton. It is taken for granted that the Republican Party candidate, Donald Trump, is "Evil." If Hillary Clinton is a "Lesser Evil," should someone vote for her, in order to avoid the greater harm?

Should a person vote for "Evil?" Of course not. Should a person vote, then for a "lesser Evil?" Of course not. Never vote for "Evil," in any form! But let's take religion (and religious categories) out of politics. The genius of our system is that we insist that there should be NO religion in politics. Arguments that style themselves as a discussion of whether or not to vote for the "lesser Evil" are suggesting that questions of ultimate morality (the kind associated with religion) should be the basis of our political decision-making. Even if the "Lesser Evil" concept is just metaphorical, words condition us to think they refer to realities. That's where we are headed, and our politics is breaking down. When politics becomes a crusade for holiness, or against "Evil," we have lost our way.