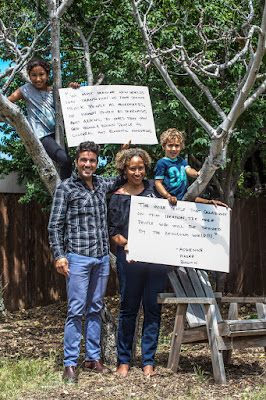 You can learn about Stephen Texeira's extraordinary Oakland Neighborhood Project by clicking the link. The project was explained in Caille Millner's column in The San Francisco Chronicle on Saturday August 20th. That column, "Oakland photos capture its essence," may be behind the Chronicle's robust "paywall," but you can try the link anyway. If you can't access the article online, you can at least see many of Texeira's pictures of Oakland's neighborhoods by going to his site. He's trying to document all of the city's neighborhoods, with a single photo for each, and there are at least 150 separate neighborhoods in all.

James Jackson, in one of the photos in the gallery, standing as a representative of the Oakmore neighborhood, gave me the title for today's post: #RepTheTown.

Let's not get too distracted by the Kardashians. We don't live there!