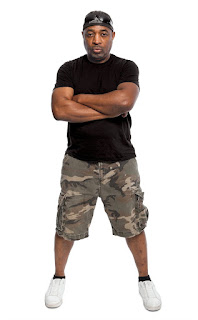 You can read a little a bit about the rapper/musician Chuck D by clicking this link. Chuck D is best known, I think, for his leading role in the rap group, Public Enemy.

The August 7th edition of The New York Times Magazine announces Chuck D's part in a new supergroup called Prophets of Rage, which demonstrated during the Republican National Convention in Cleveland.

It doesn't seem that the new group is intended to supplant Public Enemy. Instead, Chuck D characterizes it as a "collective task force of revolutionary musicians," which includes members of Rage Against the Machine and Cypress Hill.

The Times article is headlined, "Chuck D Thinks Rage Is Good For America," and Prophets of Rage is touring the country (largely the East Coast), with the tour being called "Make America Rage Again."

We know the candidate who wants to "make America great again," so I, personally, am looking for alternatives, musical and otherwise, and although "rage" doesn't sound like my idea of what a healthy politics should be all about, I am totally with Chuck D in what I think he is actually telling people:

We aim to be a voice for the voiceless, a voice that raises people's consciousness. We are the "Camp Pain" against the campaign.

Chuck D makes clear that we need a different kind of politics, and that he and the Prophets of Rage are not necessarily "Hillary guys."

It’s really exhilarating to see a presidential nominee with train wreck coming out of his mouth, and people are astonished and shocked by it, and treat it as if it’s a haunted house. You know the haunted house where people are afraid but they go in anyway? That’s what this Donald Trump thing is like.

[Everything about Trump is saying], “Stay away!” It says, “Get out!” And you keep saying: “Oh, my God. It’s so scary!” while walking into the haunted house. Then you see a head roll down the staircase. And you’re like: “Oh, my God. What’s up them steps? What’s up that staircase?” It’s not about being pro-Hillary. The word is out there that she’ll do anything and say anything to be in that position.

Chuck D never really completes his thought about what we should do about that haunted house, and the haunted house politics we are now experiencing. Maybe, of course, he was just edited. Click the link. The whole interview was constructed to fit on a single page.

But if I can be permitted to guess how Chuck D would complete his thought, right after his observation that Hillary Clinton's reputation is a little bit scary, too, I think he might have said something along these lines:

We don't need to go into that haunted house, and especially not one by one. If we do go in, let's all bust in together and take the place over. Better yet, though, let's stay away completely from the kind of haunted house politics that both parties seem to be providing to us, though maybe in different degrees.

We need a new kind of politics. We need a party in the streets!