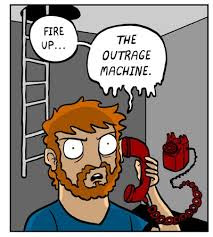 The New York Times ran an article on Friday, September 23rd, under the headline, "Inside Clinton's Outrage Machine, Her Allies Push the Buttons."

The article, which is well worth reading, details the mechanisms by which modern political campaigns advance their message and mobilize their supporters. Hillary Clinton is not the only candidate with an "outrage machine." In fact, ALL the candidates have them, and picking up the "red phone," and "firing up the outrage machine," occurs on pretty much a daily basis (if not an hourly basis), as a key feature of modern politics. We get used to having our "buttons pushed."

New technologies make recourse to outrage an easy choice, which means that voters are being invited to be "outraged" all the time. And many of them are. Others, experiencing "outrage fatigue," decide to pay no attention to politics at all.

Outrage doesn't have to be the main currency of political discourse, as Michael Sandel argues in a piece from the Harvard Gazette. "People want politics to be about big things."

Harvard philosopher Michael Sandel once invited Ronald Reagan to speak at his liberal California high school. In an interview, he tells how he prepared his most difficult questions and let loose:

A: "[The questions] were all about issues on which he and we disagreed. He was for the Vietnam War; we were against it. He was, at that point, against the United Nations; we were in favor of it. He was a critic of Social Security, and of welfare; we were in favor of them. He was against 18-year-olds getting the vote; we were very much in favor. And so, issue by issue, I asked him the strongest, toughest questions I could think of. But I didn't lay a glove on him. He responded - graciously, with easy humor, in a reasoned way - to every question I put to him. Then, about halfway through, we opened the floor to questions, and the same thing happened. Few if any of the questions reflected agreement with his views, but he was able to respond to each question in a surprisingly disarming way.

When the hour came to an end, I thanked him for coming; he thanked us for having him. He left through the back door of the auditorium, got in his car, and off he went. None of us, least of all me, were quite sure what had happened, because on the one hand, he hadn't persuaded us on any of these issues. And yet, because he took us so seriously, or so it seemed, and because he responded so respectfully and also with good humor, we found that we had almost been charmed - this despite the fact that we thought of ourselves as quite rigorous, demanding, hardheaded, politically sophisticated high school students.

Q: What did you take away from that experience?

A: That here was a figure who, though he held political views diametrically opposed to mine - to ours - he listened to the questions, he took them seriously, he took us seriously, and he addressed us. He tried to reason with us, and he did it with humor. There was something winning in that, even though he didn't persuade us."


A politics based on "outrage" can never be productive of the kind of positive public policy decision-making that is supposed to be the outcome of our periodic political contests.

No matter how outrageous or deplorable the opposition (and, boy, we do have some good examples in the current presidential contest), my thought is that it's time to pull the plug on political outrage.

There is a lot to get outraged about, but how about not? 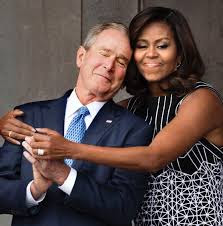