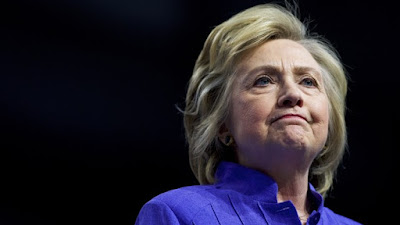 The title for today's blog posting comes from a headline on an article in The Washington Post. According to The Post, "Democrats are increasingly worried that Hillary Clinton has not built a formidable lead against Donald Trump despite his historic weaknesses as a national party candidate."

I’m concerned, frankly, said former Democratic Senate leader Thomas A. Daschle (S.D.). It still looks positive, and I think if you look at the swing states and where she is right now, she’s got a lead. But it’s certainly not in the bag. We have two months to go, and I think it’s going to be a competitive race all the way through. I would say she’s got at least a 60 percent chance of winning. At the same time, Daschle said, “all the things that Trump has done, the numbers should be far more explicitly in her favor, but they’re not.

If Clinton and her campaign share the worries expressed above, which I think they ought to (I certainly share them), then that would seem to argue against the kind of "run out the clock strategy" I mentioned in my blog posting yesterday. It should also mean that the Clinton campaign will be canvassing for new ideas about how to do better in getting the voters to elect her as president.

As it happens, I have some advice on this topic, which advice actually relates to Clinton's very recent (and very ill-advised) comment that "you can put half of Trump supporters into what I call the basket of deplorables." That comment, made at an upscale fundraising event featuring Barbara Streisand, was pretty deplorable itself, in my view, and was quickly repudiated by Clinton, when it became abundantly clear that her remarks had not gone down too well. Please note, however, that in "walking back" her comment, Clinton did not repudiate the basic thrust of what she said about those supporting Donald Trump. Instead, she admitted that she spoke too quickly in saying that "half" of his supporters were in the basket. It was less than half! That was Clinton's amendment of her remark.

Characterizing Trump supporters as being in a "basket of deplorables" illustrates a basic feature of the Clinton campaign, which has reflected a sense of self-confident "entitlement" from the very beginning. Clinton obviously believes that her background and experience provide a compelling reason to elect her, and she also believes that she is entitled to judge who is, and who isn't, qualified to lead the nation. This has led the Clinton campaign to assert, as one of its basic themes, that her opponent is "unfit" and unqualified. I do think it is fair to say that this charge, that Donald Trump is "unfit" to be president, is one of the basic themes of the Clinton campaign. Given Clinton's strongly-held view that Donald Trump is "unfit," it's easy to see how Clinton came to her recent statements. Trump is "unfit," and a "deplorable" candidate, and so his supporters go in that "basket," too.

I intend to vote for Hillary Clinton, I want her to win. I agree that Hillary Clinton is well-prepared to be president, and that she is much better prepared than her opponent. I think that Donald Trump would be a terrible choice for president, and that he is temperamentally and otherwise not the right person for us to put in charge of the country. Trump himself, and many of his supporters, do show alarming evidence that they have a racist, sexist, homophobic, xenophobic, and Islamaphobic view of the world. This was Clinton's charge at the Streisand benefit, and one of my friends sent me a link demonstrating that there is actual evidence that this characterization has merit.

All that said, for Hillary Clinton to base her campaign on the argument that her opponent is "unfit" to be president is NOT a very good campaign strategy, in my opinion. Among other things, that charge comes across as elitist, because in our system of government the voters (not the Clinton campaign) have the right to decide who is "fit," or "unfit," to be president.

As Clinton actually noted in the speech in which she made her "deplorables" comment, many of Trump's supporters "are people who feel the government has let them down, the economy has let them down, nobody cares about them, nobody worries about what happens to their lives and their futures, and they're just desperate for change."

Correct! And people with that mindset are the opposite of "deplorable." In fact, it may well be that more than half of the voters in the November election will absolutely fit this last description, and believe that "the government has let them down."

As someone who has been deeply engaged in government for most of her life, and who has helped, in various ways, to get us where we are, Clinton's background and experience are in many ways a "negative," not a "positive," for Hillary Clinton. The more the Clinton campaign attacks Donald Trump as "unqualified," the more many voters conclude that he is a person who will make changes, since Clinton is such a fine representative of the policies that are now in place.

In my opinion, this is a major reason, as Senator Daschle observed, that "the numbers should be far more explicitly in her favor, but they’re not." Campaign attacks on Trump as "unfit" actually call him out as someone whom the elite people running this country believe would make a change. If large numbers of the voters want a change, every campaign ad attacking Trump as "unfit" (according to the elites now in charge) is an advertisement in his favor.

My experience with political campaigns is that every campaign, in the end, turns out to be "about" one thing, or a very small number of things. Clinton has the experience to understand this, having been deeply involved in a successful campaign that tried to focus all of its activities on the single most pressing concern of the voters at that time (it's the economy, stupid!).

This time around, I think the election is "about" who is going to make fundamental changes in the direction of our nation. My advice to Clinton is to recognize this. If this election is one in which many voters, including specifically voters in the so-called "swing states," will be looking to elect someone who will make fundamental changes in the economic and other policies currently guiding the activities of the federal government, then Clinton needs to be demonstrating that she is the person to do that. Naturally, she should also not use her own advertising money to make the case for her opponent, which is what I fear is really going on.

Hillary Clinton should be running as an agent of change, not as the standard bearer for business as usual, which is how her claim to have the right "background and experience" can come across. She should also not be claiming the right to say, on behalf of the voters, who is "fit," and who is not "fit," to be president. Even if her judgement on that question is good (and I think she is right about Trump), the voters are going to reserve their own right to make up their minds, and don't want someone trying to tell them who is "worthy" and who is not.

Hillary will win if she convinces the voters that she is going to make the changes that they desperately want, and not by challenging the fitness of her opponent. At least, that's my view.

As a kind of postscript, here is a thought from Warren Buffet, a billionaire supporter of Hillary Clinton. According to a recent column in The New Yorker, Buffet has adopted the advice of Dale Carnegie, in his book, How to Win Friends and Influence People:

Praise by name. Criticize by category.

That's good advice - even for politicians, and even in a campaign context. Attacks on Trump, by name, are only going to "promote his brand" and outrage and mobilize those who think that his election just might provide a route to getting the kind of political change they want to see.