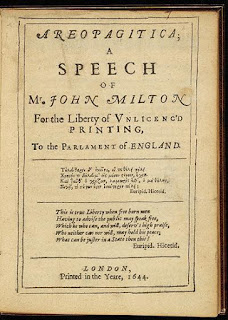 I almost always find the Amor Mundi newsletter, published by The Hannah Arendt Center at Bard College, to have something important to say about our current political life. You can subscribe, if you want to. It's free. Just click right here.

The August 14, 2016 edition of Amor Mundi had an article on free speech, and it's well worth reading.

The article was titled, "Why Free Speech?," and noted that our commitment to the concept of a "marketplace of ideas," as a way to describe the benefits of a society that is based on free speech, fails to account for the "market distortions" that are routinely produced by those who have great wealth, and who are able to use that wealth to have a disproportionate influence on "the market."

In other words, in the "marketplace of ideas," facts and the truth are for sale, and the Golden Rule of politics applies: Those With The Most Gold Rule.

I have recently been reading articles that make the point that we are living in a "fact free" world. I am sure that I will present those arguments to Two Worlds readers in a subsequent blog posting. The "fact free" nature of our current reality is definitely related to that "marketplace" concept in which we have put so much faith. The concept that facts and the truth are found in the "marketplace" also means that the wealthy have been able to decide what "facts" and what "truths" get discussed. The "free speech marketplace," in other words, is a mechanism for suppressing the truth, not advancing it, and public cynicism about the bona fides of any claim to "the truth" is the almost inevitable result.

Hanna Arendt did not believe that free speech was important because the exercise of political free speech would inevitably lead to the collective recognition of "truth." She did not fall into an Adam Smith-like belief that free speech will act as some sort of "invisible hand," to make clear to society what is honest, true, and just. Quoting from the Amor Mundi article, here what Hanna Arendt thought about truth and politics. This is a thought you may not have had yourself:

Free speech, [in the realm of politics] is not about truth .... Politics is about opinions. There is never one truth to which politics strives. Instead, politics is the activity of free and equal citizens who together must build a common world, a world in which they can live together amidst their real and important differences. Politics does not aim at truth; it aims, instead, to allow unique and distinct peoples live together as they pursue their particular truths.

Hannah Arendt was a committed defender of the freedom of speech; but Arendt did not believe that free speech is justified because it would lead to the embrace of political truth. In writing about free speech, Arendt offers an alternative justification, one grounded in the importance of plurality: “We know from experience,” Arendt argued, “that no one can adequately grasp the objective world in its full reality all on his own, because the world always shows and reveals itself to him from only one perspective, which corresponds to his standpoint in the world and is determined by it.”

For Arendt, the freedom of speech means that we will always hear other opinions, other perspectives, and other arguments than our own. Free speech is the foundation of all expansive and right thinking. “Only in the freedom of our speaking with one another does the world, as that about which we speak, emerge in its objectivity and visibility from all sides.”

The world is not something that can be true or false; it is plural and must be enjoyed and also preserved in that plurality. Freedom of speech is what defends that plurality.

Political claims that one person, one candidate, or one party has "the truth" are not only certain to produce a rejection of the entire idea of "truth," such claims are inherently totalitarian, and ignore the central reality of our human condition: we are truly and absolutely different, and yet we are "in this together."