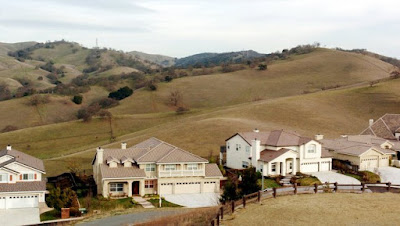 Here is a picture of new development in Clayton, California, located in Contra Costa County, part of the greater San Francisco Bay Area. The picture appeared as an illustration for Paul Rogers' May 17, 2016 report in the Mercury News.  Rogers' report was titled, "America's vanishing West: California losing most land to development."

Talk about deja vu all over again! I served on the Santa Cruz County Board of Supervisors for twenty years, from 1975 to 1995, and the main issue that the community confronted during that time was the kind of sprawling development visible in this picture. When I took office, Santa Cruz County was the fastest-growing county in the state of California, and it was the fifth fastest-growing county in the entire United States. A lot of that growth was rural sprawl.

Rogers notes in his article that the natural lands that support our human projects are being destroyed at a rapid pace. You can read an in-depth report by clicking the link to download a copy of The Disappearing West.

The picture is one of many that show the damage from the Clayton Fire, a human tragedy that reflects what can happen when we don't pay attention to the limits of our natural world. 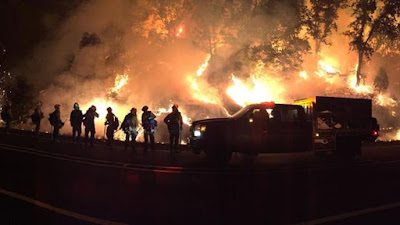