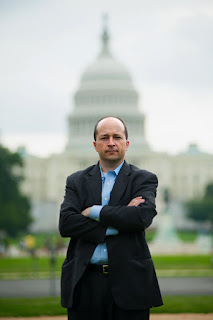 Nicholas Lemann has written a review of The Fractured Republic, by Yuval Levin. Levin is pictured to the left, though his politics are to the right. Levin was the founding Editor of National Affairs, and has been called "probably the most influential conservative intellectual of the Obama era."

Lemann, who is a staff writer for The New Yorker, is the Joseph Pulitzer II and Edith Pulitzer Moore Professor of Journalism, and is the Dean Emeritus of the Faculty of Journalism at the Columbia University Graduate School of Journalism.

Lemann's review of The Fractured Republic appeared in The New York Times Book Review on June 26, 2016. Online, that review was titled, "Why Conservative Intellectuals Hate Trump." In the hard copy version, the title read, "Get Over It."

I don't intend to read Levin's book, but I do want to highlight an observation from Lemann's review, commenting on Levin's book. Lemann says this:

According to Lemann, Levin thinks that Donald Trump and his plan to "Make American great again," is way off base, wallowing in "nostalgia and grandiosity." Levin would tell Trump, presumably, "Get Over It!"

Since I haven't read Levin's book, I can't be absolutely sure of this, but I gather that Levin thinks that it is a good thing that "individualism" has superseded "the powerful institutions that dominated national life in the first half of the 20th Century." I assume that includes institutions like Social Security and Medicare, though I'm not absolutely positive about that, either.

We don't know, really, what Trump thinks about anything; at least, I certainly don't. I do believe, though, that if we think a "fractured" Republic is less desirable than one that is not "fractured," we need to resist any continuing calls to advance "individualism" as the guiding principle of the nation.

"Individualism" suggests that we should all "hang separately." I think that "we are in this thing together."

To the degree that Trump acknowledges that the binding institutions that we developed during the first half of the 20th Century have done much good, then that is one point in his favor, as far as I am concerned.

And as for Yuval Levin, that "leading conservative intellectual of the Obama era," if he is actually arguing against national institutions like Social Security, it's my opinion that he is placing himself on the losing side. The horrific consequences of unabashed "individualism" as a national guiding principle has given us the 1% / 99% economic and social division that demonstrates, truly, that "fractured" Republics just don't work.

My advice to Levin: "Get Over It!"