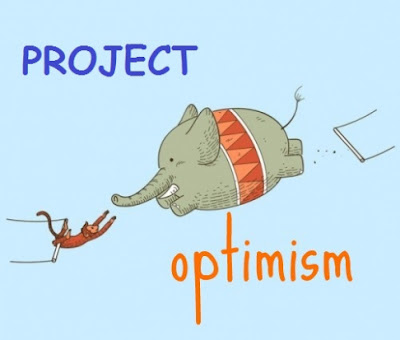 I am not sure whether the above illustration is intended to be about optimism as a "project," as in a task to be accomplished, or whether the illustration is advising us to "project" an optimistic outlook, in the face of daunting realities. The elephant, I believe, is intended to reference "daunting realities," and is not, specifically, a reference to the Republican Party. However, even if unintended, a reference to the Republican Party in this illustration is appropriate, since I want to continue my reflections on politics, from yesterday, and to provide readers with links to another couple of interesting items from yesterday's newspapers.

I searched out the illustration above, mentioning "optimism," because I think that a column by Ramesh Ponnuru is worth reading. Ponnuru is a right-winger who normally writes for the National Review, but the column I am recommending, "Why Hillary Should Fear Optimism," appeared yesterday in the "Sunday Review" section of The New York Times.

Ponnuru's main point, which I think is on target, is this:


Instead of reasons for hope, the Democrats offered ... voters bromides about optimism: America’s best days are always ahead of it, etc., etc. These bromides came with a liberal spin, the genius of America being defined as its closer and closer approximation of egalitarian ideals. The idea that American patriotism consists of loyalty to a future country clearly speaks to many of our citizens. Will it be enough in an anxious era, when Americans are deeply dissatisfied with their politicians? And when Mr. Trump is offering a more pointed explanation of that dissatisfaction than the Democrats are?

The Democrats’ optimism about the country is tightly related to their optimism about their own political fortunes, which is based on demography. They represent growing demographic groups — including nonwhites and the unchurched — rather than shrinking groups like the white working class. But that optimism is unlikely to prove contagious among that group.

And the Democrats’ rhetorical optimism is vulnerable to events in a way Mr. Trump’s is not. Terrorist attacks and high-profile crimes may not make Americans find new virtues in Mr. Trump, but they will validate his campaign message and make the Democrats’ look naïve or worse.

Frank Bruni, who is one of The Times regular columnists, didn't use the word "optimism" in the title of his column yesterday, but I think he is making much the same point as Ponnuru. You can read Bruni's take on the Presidential campaign by clicking the link. His column is titled, "The Trouble for Hillary."

Here are the final words of Bruni's column:


Trump seized on her convention-speech optimism and used it against her in a series of tweets on Thursday night and Friday morning, complaining that she forgot “to mention the many problems of our country” and refused “to mention Radical Islam.”

He also tweeted this bulletin: “Two policemen just shot in San Diego, one dead. It is only getting worse. People want LAW AND ORDER!”

I’m doubtful that a majority of them want it in all capital letters, followed by an exclamation point, from an egomaniac with as little intellectual as typographical subtlety.

But to guarantee his defeat, Clinton needs to calibrate her voice more deftly than she typically does.

She’s right that we’re “stronger together.” But she can’t forget how weak many Americans feel right now.

Yes, “love trumps hate.” But the hateful currents running through America are powerful ones, and they’re born of a disillusionment that she minimizes at her peril.

One or both of the "Stronger Together" and "Love Trumps Hate" slogans appeared with Orwellian predictability in virtually every speech given from the stage of the Democratic National Convention, even including the wonderful speech of Michelle Obama. Preprinted signs reinforced this messaging, and Democratic Party cheerleaders on the Convention Floor demanded that the right sign be displayed at the right time. This was Madison Avenue meeting politics, and Bruni leads off his column with an acknowledgment: "Watching the Democrats’ smoothly staged, potently scripted convention last week, voters could easily think that Hillary Clinton has this election in the bag."

Advertising is the methodology of manipulation. Voters, especially right now, object to being manipulated. My advice to the Democratic Party is to start being "authentic," the word most often applied to Bernie Sanders and his campaign. Donald Trump is despicable, but he is "authentic," too.

This is not the year to try to manipulate voters who want real change. If the Democrats can't provide positive change, the other party is both willing and able to provide the negative variety.

Did I say this yesterday? The stakes are HUGE!