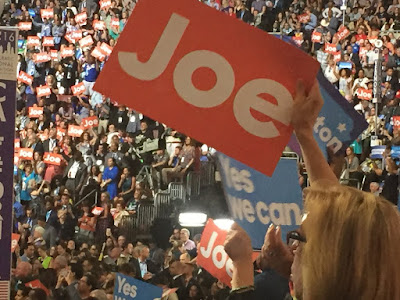 THE STORY OF STUFF
A Monterey Bay Area friend sent me a message, asking me to bring home lots of Convention materials, if I have been saving them, so these political materials can be used to decorate the local Democratic Party Headquarters during the upcoming elections. I am, I was sorry to have to report to her, not taking the preprinted materials when offered, and I am definitely not saving them.

The "Joe" signs, pictured, which were displayed in the thousands during Joe Biden's speech to the Convention, are only one small sample of the materials that have been handed out in abundance during the last three days. I have already commented on how I have found this method of communication to be somewhat "forced," and an attempt to impose a simplistic "party line," visible to television viewers, as opposed to displaying (probably an impossibility, granted) the actual complexity of what people here are actually thinking (and saying, in personal conversations). If I thought that was true before, I now think so even more, having experienced last night the way that "floor management" is being carried out by Party enforcers, who flat out demanded that delegates take instructions from them on exactly how and when to display the specific materials that are permitted to be used. Non-permitted signs, incidentally (like "NO TPP" signs, or "Bernie" signs), have to be discreetly smuggled into the Convention, and are subject to confiscation. I have not wanted to be a part of the Party's enforced communications methodology, or to engage in the "War of the Signs," as some Bernie delegates have done. I'm writing this blog, instead!

One of my objections to the wholesale handout of preprinted materials, besides its enforced "Party Line" character, is that the distribution, display, and discard of these tens of thousands of signs is just plain wasteful. I hope that the materials will be recycled when discarded, but I'm not very confident. The Headquarters Hotel for the California delegation, for instance, the Philadelphia Downtown Marriott, does not encourage (or apparently even permit) recycling in its guest rooms or public places. A Party that was thinking about the environment could have made that a requirement! I presume readers of this posting will have heard about "The Story of Stuff." We need to take it to heart. 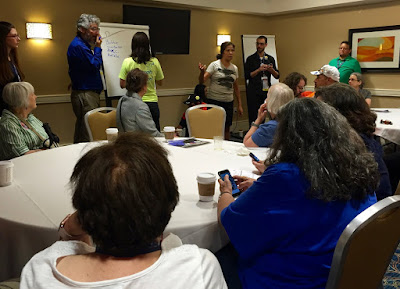 BREAKFAST OVER, THE BERNERS MEET
The Bernie Sanders Delegation from California (a very small portion of which is pictured above) has been playing a leadership role at the Convention, helping to make sure that the rest of those attending the Convention, whether as delegates or otherwise, understand that the "political revolution" called for by Bernie Sanders is going to go forward - even after the roll call vote. Delegates from other states came to the California meeting held this morning, to thank California for making sure that the issues of major concern to Sanders Delegates are visible and "heard" on the Convention Floor.

People may have noticed that various news stories have appeared, highlighting the "walkout" staged by Bernie Sanders Delegates, after Hillary Clinton was officially declared the Democratic Party nominee for President. This declaration of Hillary's official designation as the nominee came on the basis of a motion made by Bernie Sanders, incidentally, as I pointed out yesterday. The fact that the Convention Chair misstated the motion, and tried to give the impression that there was unanimous assent, soured the moment, but in all candor, the Bernie Delegates who walked out would probably have walked out anyway. No one likes to lose, and in this case the election was determined by unelected "Super Delegates," representing the Democratic Party Establishment. Without those "Super Delegates," Hillary wouldn't have had enough votes to win on the first ballot. In addition, the Party's admission that Party employees actively worked during the primaries to promote the Hillary Clinton Campaign, while they actively worked to undermine the Bernie Sanders Campaign, made those who favored Sanders less than happy that these tactics, an attack upon and a denial of genuine democracy, had actually worked.

However, make no mistake, the "Berners" were back last night on the Convention Floor, and the picture above shows a meeting of the California Delegation this morning, held after the California Democratic Party Breakfast. The photo here is somewhat deceptive, in that it doesn't properly reveal the totally packed room that was just behind the photographer. By the way, to give you a hint of how hard it has been to engage in basic democratic activities here at the Convention, the Party has contracted with the hotel to refuse to make rooms or other meeting places available to any group that the Party does not specifically approve. The California delegation for Bernie Sanders, which has a size of 200+, was allowed to use Room 302, where the picture was taken, for only thirty minutes, when the group was summarily made to leave.

The purpose of the post-breakfast meeting pictured was to "debrief" events from the day before, and to plan ahead for the Convention today. I'll give just a brief report.

DEBRIEFING
Sanders Delegates reported this morning on the bullying and harassment that a number of Sanders Delegates experienced on the Floor yesterday. The Party apparently allowed non-delegates to be admitted to the California section, and if an actual Sanders Delegate left his or her seat (for instance to get something to eat, or go to the restroom), the non-delegates then tried to claim those seats, so the Sanders Delegates could be denied entrance to the section reserved for them, on the basis that there weren't any seats.

There was also evidence that pushing, shoving, and verbal harassment of Sanders Delegates was being intentionally promoted (not by other Delegates, for the most part, but by people apparently sent in by the Party to do this as a "job"). Secret Service agents escorted anyone engaged in physical engagements out. The idea was to provoke Sanders Delegates, and then have them barred from the Floor. As far as I can tell, the tactic was not actually successful,

One delegate from another state reported that he had witnessed "white noise" machines being used to obliterate chants or other verbal displays of any dissenting views. Readers of this posting, probably, did not see any evidence of these sorts of things on television, but I think the reports are accurate. I only got to the Floor rather late in the day, since Alternates are supposed to be housed in the rafters, and I slipped in to our Delegation's seating area in response to a call for reinforcements, to try to hold that Bernie "turf," as these tactics I just reported about were apparently threatening to have some success. I can personally say that I saw some of this behavior myself. Another anti-Bernie Delegate tactic, and one that I have also experienced personally, has been for non-Bernie Delegates to ask Bernie Delegates for their credentials, on the basis that the person asking has "lost" his or her own credential. Anyone falling for this sham request, is then fingered as not having a credential and is evicted. We were all told not to fall for this ploy, and I definitely didn't! I was, however, asked!

NO MORE WAR
Leon Panetta, former Monterey Bay Congress Member, left Congress to serve in the Bill Clinton Administration as head of the Office of Management and Budget (OMB). He then served as Bill Clinton's Chief of Staff, leaving that position as Bill and Monica were making the front page news. President Obama put Leon Panetta in charge of the CIA, and then in charge of the Department of Defense, where Leon's very "hawklike" tendencies became publicly visible. At this Convention, Panetta was called upon (yesterday) to testify that Hillary could be relied upon to be "hawklike" and "warlike," too, just in case anyone didn't already get that picture.

During Panetta's presentation, the California Delegation, amplifying a chant that was started, I understand, among Washington State Bernie Delegates, very loudly proclaimed, "NO MORE WAR, NO MORE WAR." Leon Panetta was clearly flummoxed, and the Party apparatus quickly dimmed the lights over California, and set up a competitive chant, "USA, USA," to quench the "No More War" message. In the California Delegation debriefing this morning, Sanders Delegates were particularly proud of making sure that everyone in America knows that Democratic Party activists don't all want military solutions to the very vexing problems that wrack our world.

BIDEN MY TIME
Let me associate a comment about Joe Biden's speech with the "No More War" message that did come through to the Convention, and to the country, because of the Sanders Delegates from California. I thought Biden's speech was great, and uplifting, and positive, except that I worry about his last line, "America owns the finish line." A headline in today's Washington Post proclaimed, "Democrats claim patriotism, God and American exceptionalism at convention." I am always a bit worried by any claim that the United States is so "exceptional" that it should be the "final decider" about what happens in the world. Senator William Fulbright called this attitude "The Arrogance of Power," and it's a weakness, not a strength, in my opinion.

"Owning the finish line" smacks of an assertion that America will always have the last word on the way things will be. There has been a bit of that kind of thinking evident in this Convention, and within the Democratic Party, as to who should be the President. Bernie Sanders and his voters challenged the Democratic Party Establishment. The Establishment really does seem to have a feeling that the Party apparatus should decide who the President will be, not the voters, and certainly not the young, "ragtag" voters who rallied with Bernie, all around the country.

That's dangerous for the Party, and even more so for the country, and a "we own the finish line" approach is dangerous to the nation.

More on that thought tomorrow. For now, as I post this commentary at a little after 2:30 p.m., Eastern Time, the question is what Hillary Clinton will say tonight. I'm leaving for the Convention, to be there when the gavel falls at 4:00 p.m. I can't wait to find out!