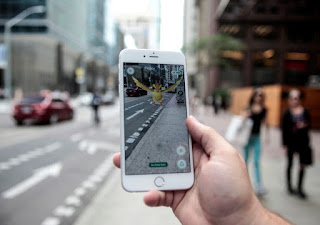 According to what I am told by the Vox Explainers Website, it's unlikely that you will know anything about Pokémon Go if you were "born before 1984." Hey, I was!

My age-related disability notwithstanding, I have found out something about Pokémon Go, stimulated by lots of news coverage, and a set of pictures of people playing the game, as published in The Atlantic Photo.

I am not much of a games player myself, and I doubt that the attractions of Pokémon Go are going to change that. I must admit, nonetheless, to being fascinated by the whole concept. It seems to me that we might well consider taking this game seriously.

The company that has created the game, Pokémon Company International, advertises Pokémon Go as a game based on an "augmented reality." That means that computer-generated Pokémon creatures (called Pokémons) are inserted into real world scenes, as the real world is viewed by someone playing Pokémon Go and observing the real world through his or her smartphone camera.

The picture above shows how it looks. Check that Atlantic Photo website for more examples. You might also want to click this link to hear from the Holocaust Museum, which is objecting to people visiting its exhibits not to appreciate the historical lessons that the museum has to teach, but to capture various unreal Pokémon creatures that are apparently available for capture there. Guess that is a problem at Auschwitz, too.

As explained by Wikipedia, here's how the game goes:

After logging into the app for the first time, the player creates their avatar. The player can choose the avatar's style, hair, skin, and eye color, and can choose from a limited number of outfits. After the avatar is created, it is displayed at the player's current location along with a map of the player's immediate surroundings. Features on the map may include a number of PokéStops and Pokémon gyms. These are typically located at identifiable landmarks, such as public art installations, historical markers, monuments or other points of interest.

As players travel the real world, the avatar moves along the game's map. Different Pokémon [there is quite a list] live in different areas of the world; for example, water-type Pokémon are generally found near water. When a player encounters a Pokémon, they may view it either in augmented reality mode or with a pre-rendered background. AR mode uses the camera and gyroscope on the player's mobile device to display an image of a Pokémon as though it were in the real world. Players can also take pictures, using an in-game camera, of the Pokémon that they encounter both with and without the AR mode activated.

Unlike other installments in the Pokémon series, players in Pokémon Go do not battle wild Pokémon to capture them. Rather, the game relies on a unique capture system where the player must throw a Poké Ball with the right force and at the right time to make a successful catch. After capturing a wild Pokémon, the player is awarded two types of in-game currencies: candies and stardust. The candies awarded by a successful catch depends on what evolutionary chain a Pokémon belongs to.

According to what I read in Wikipedia, Pokémon Go "was the most downloaded smartphone app in the United States in its first three days of release, and was a boon to the stock value of Nintendo, which owns part of The Pokémon Company."

I see the success of the game as a metaphor for what I believe is an increasingly visible phenomenon. Unwilling to live directly in the World of Nature, or fearful of doing so, we create artificial (or augmented) realities which protect us from the need to interact with a reality that is not of our own creation.

Since, in fact, we do not create the world upon which we ultimately depend, the World of Nature, which sustains all life, our attempts to "augment" reality are a kind of Fatal Distraction.

As we play Pokémon Go, we don't have to confront the Holocaust (past) or the various species of Holocausts (future) that are coming at us. As an example of one of those Holocausts of the future, the picture below accompanies a Rolling Stone story on whether New York City (prime game playing arena for Pokémon Go) is going to be able to survive global warming. Looks like that may be a problem!

If we took our eyes off our smart phone screens, even for just a moment, we might become aware of a number of looming problems. These would appear to us not in some "augmented" reality, but in the the world in which we really live! 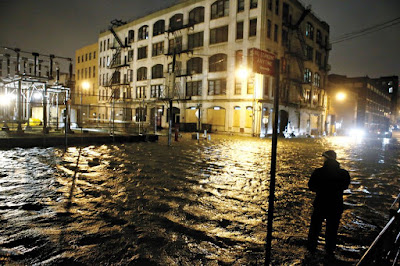