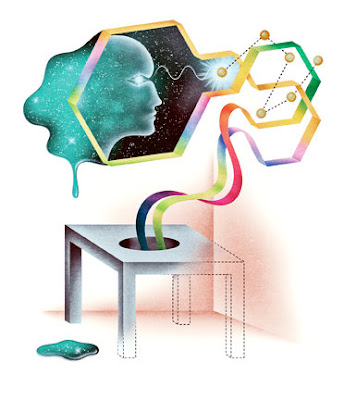 Sean Carroll has written a book entitled, The Big Picture. The "subtitle" of Carroll's book reveals its less than modest ambitions: "On the Origins of Life, Meaning, and the Universe Itself." Carroll is a cosmologist and physics professor specializing in dark energy and general relativity. He is a research professor in the Department of Physics at the California Institute of Technology. I haven't read Carroll's book, but I can refer you to a review, by Anthony Gottlieb, published in The New York Times Book Review on Sunday, June 12, 2016.

Gottlieb's review, titled "A Universe Unpeeled," in the hard copy edition (different in the online version), begins with a quotation from an editorial that ran in the November 25, 1944 New York Times: "The physical world is 'largely illusory.'"

The Times' editorial was endorsing the ideas of another scientist, Sir Arthur Eddington, "an eminent British astronomer and popularizer of science, who had just died." Eddington's best-known book is titled, The Nature of the Physical World. It is still in print. Eddington's main point is that the "familiar" world is actually a "deception on a grand scale." I gather, from Gottlieb's review, that Carroll would concur, as modern physics does seem to demonstrate. Carroll, however, would multiply the complexities involved, to reflect modern physics, as he endeavors to make sense of a reality that, in fact, is beyond comprehension.

Carroll, I'd say - just from reading the review - would seem to have views that are consistent with the insights contained in that poem I like, "The Blind Men and the Elephant." There is something real, in which we all "live, and move, and have our being," but the truth of it all is not accessible to us here, "outside the Gates of Eden."

Apparently, the last part of Carroll's book is devoted to the problem of "how to find meaning in a cosmos that is 'without transcendent purpose.'"

His conclusion, contained in Ten Considerations, is that "what matters is what matters to people." and "the universe is in our hands."

I, personally, see that as an endorsement of my Two Worlds Hypothesis.