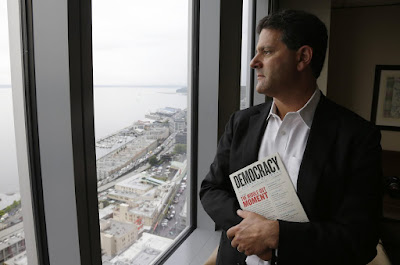 Nick Hanauer (pictured) is a self-described entrepreneur, venture capitalist, civic activist, philanthropist, and author. He has written a letter, published in a recent edition of Politico. Here is a short summary of what he has to say (and I invite anyone reading this blog post to read the whole thing):


You probably don’t know me, but like you I am one of those .01%ers, a proud and unapologetic capitalist. I have founded, co-founded and funded more than 30 companies across a range of industries—from itsy-bitsy ones like the night club I started in my 20s to giant ones like Amazon.com, for which I was the first nonfamily investor. Then I founded aQuantive, an Internet advertising company that was sold to Microsoft in 2007 for $6.4 billion. In cash. My friends and I own a bank. I tell you all this to demonstrate that in many ways I’m no different from you.

First, Nick, let's get this clear: I am NOT "like you." I am not one of the .01%ers. I am not a "proud and unapologetic capitalist." I don't "own a bank," and I have never received $6.4 billion in connection with the sale of a company I owned. Not in cash! Not in any other way!

I deduce that you're making fun of me, and probably other readers, by suggesting that I should identify with you and consider your "ultra-rich man's letter" as if I were one of your peers. If you really wanted to communicate with people who are "no different from you," you wouldn't have published your letter in Politico, which has a readership that is definitely not restricted to "the billionaire class."

I am NOT one of your peers, and I don't think your letter is actually written for your peers. You intend your letter to be read by people like me, and I'm supposed to decide that you are really a nice guy, after all, despite the fact that you are one of those .01%ers. You're one of the .01%ers  who wants to share the wealth. Right?

Just not your wealth, probably!

I am not going to make you richer by buying your book. You are not entrapping me into identifying with you. Nonetheless, I did read your letter and I do have a comment. The world of the "ultra-rich" that you describe is not, as you indicate, a world that is very stable. Things are definitely not "steady as she goes." Maybe the rest of us will be getting out the pitchforks soon, as you predict. Lots of voters have supported a presidential candidate calling for a "political revolution."

I think it would be just fine if the billionaire class, including you, started rearranging the economy and society along the lines you outline. However, my advice, for people who are quite different from you, and not that different from me - the 99%ers, in other words - should not wait around for the billionaire class to act on your prescriptions.

There are lots of ways to end the absurd economic inequality prevailing in this country. I don't prefer pitchforks. I prefer politics.

My friends and I are "coming for you," but with politics, not pitchforks.