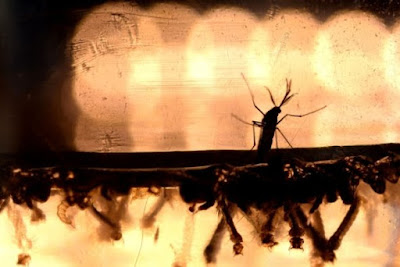 Here is what Wikipedia, the online encyclopedia, says about the term "gene drive."

Gene Drive is the practice of stimulating biased inheritance of particular genes to alter entire populations. Possible alterations include adding, disrupting, or modifying genes, including some that reduce reproductive capacity and may cause a population crash ... Synthetic genetic modules with similar properties have been developed as a powerful technique for genome editing of laboratory population. It has also been proposed as a technique for changing wild populations, for instance to combat insects that spread diseases (in particular mosquitoes in the cases of malaria and zika), to control invasive species, or to eliminate herbicide or pesticide resistance ... Because it is a way to artificially bias inheritance of desired genes, gene drive constitutes a major change in biotechnology. The potentially huge impact of releasing gene drives in the wild raises major bioethics concerns regarding their development and management.

Hank Greely is a professor at Stanford Law School, and is the Director of the Center for Law and the Biosciences. He is also a professor (by courtesy) of Genetics, at the Stanford School of Medicine, the Chair of the Steering Committee of the Center for Biomedical Ethics, and the Director of the Stanford Program in Neuroscience and Society. Writing about gene drive in Stanford's Law and Biosciences Blog, Greely says this:

Gene drives, which use genome editing (and especially CRISPR/Cas9) to push edited variations of genes through whole populations at great speed, are perhaps the most exciting and frightening products of new biotechnologies, giving humans more control than ever over all life on Earth.


In an article by Heidi Ledford, a Boston-based reporter for Nature, we are warned that "Fast-Spreading Genetic Mutations Pose an Ecological Risk." In essence, though her article never uses the term, Ledford is imploring us to consider the "precautionary principle" where "gene drive" technologies are concerned.

Nature, it appears, is trying to provide a public service by giving its non-scientist readers a "heads up" about what is happening in the "gene drive" arena. The Ledford article refers to another article published in Nature, this one by Kevin Esvelt. Like Ledford, Esvelt is calling for scientists to be a bit cautious before fully deploying their recently-acquired ability to "engineer" future life.

Just to be clear, however, Esvelt heads a group called "Sculpting Evolution," which proclaims that its mission is "engineering biology in the light of evolution." Given that mission, it's clear that while Esvelt is cognizant that caution may be called for, he is far from being "against" the idea of "gene drive" on principle.

I am in favor of caution, but I'd go further. I would like to raise a fundamental objection. "Gene drive," and "sculpting evolution," suggests that human beings should now appoint themselves the architects of life on Planet Earth. Start small, Esvelt and Ledford might say, but neither suggests that any fundamental roadblock to "sculpting evolution" should be erected.

I am in the contrary camp. I agree with Greely that this prospect is "frightening."

We are, inevitably, "creatures," and I think we should focus on "engineering" the human world, the world that we do, in fact, have responsibility for creating and maintaining. This human world lives "within" the World of Nature upon which we (and every other living thing) ultimately depend. Efforts by human beings to start using genetic engineering techniques, like "gene drive," to let human beings determine the future characteristics of all living organisms will quite likely result in the manufacture of monsters.