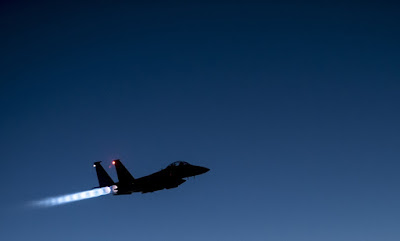 The June/July 2016 edition of Connections, published by the Peace & Justice Network of San Joaquin County, reprinted an important article from The Guardian, entitled, "Obama is bullish on war, no matter how you spin it."

Having been awarded the Nobel Peace Prize in 2009, the President would undoubtedly like to emphasize his commitment to peace, and to "spin it" that way. Nice try, Mr. President! The fact is, as Trevor Timm says in his article in The Guardian:

Barack Obama has now been at war longer than any president in United States history ... Barring some sort of peace miracle in the next six months, he will be the only president who ever served two full terms in office while constantly being at war. And given how he has transformed how the US fights overseas, his wars will likely continue long after he leaves office.

Here's a reprint of the article. Let's not let our war without end truly "spin out of control!"

This week the White House formally announced that Barack Obama will become the first sitting U.S. President to visit Hiroshima, Japan on May 27, 2016.

Secretary of State John Kerry went to Hiroshima last month. His visit was widely seen as a “trial balloon,” presaging the just-announced Presidential journey. Marylia Kelley told Democracy Now! host Amy Goodman, “Kerry went empty-handed. The United States needs to go with a concrete plan to roll back its own nuclear weapons program. You cannot preach abstinence, in terms of nuclear weapons, from the biggest bar stool in the room.”

The U.S. continues to rely heavily on nuclear weapons and is embarking on a $1 trillion program over 30 years to upgrade every aspect of its nuclear arsenal, including with new warheads, missiles, subs, bombers and nuclear weapons production facilities.

Herein coexist a fundamental policy contradiction, a huge challenge for peace activists and, quite possibly, an unparalleled opportunity to influence the future.

Tri-Valley CAREs and colleague organizations are urging President Obama not to go to Hiroshima empty-handed. We are not asking Obama for a big speech full of lofty rhetoric and fancy words. Our message is: “Actions speak louder than words, Mr. President.”

We are calling on President Obama to take concrete action to roll back aggressive U.S. nuclear weapons programs. The President should use the visit to announce:

Now is the time for genuine action for nuclear disarmament, and what better place for the U.S. President to announce it than in Hiroshima, where on August 6, 1945 the U.S. dropped the first atomic bomb used in war. Three days later, the U.S. dropped a second bomb on Nagasaki. More than 200,000 perished in the two cities, mostly civilians. Today, the remaining Hibakusha (survivors) still carry the scars, suffer longstanding health effects and are dying because of their exposure.

President Obama created high expectations in 2009 in Prague when he announced “America’s commitment to the peace and security of a world without nuclear weapons.” On Tuesday, Ben Rhodes, the White House deputy national security advisor, wrote that Obama's trip to Hiroshima would reaffirm that commitment.

Our challenge as peace activists: Make the first sitting U.S. President’s visit to Hiroshima mean more than the symbolism and a “photo op” and some pretty words. Make it count, Mr. President!