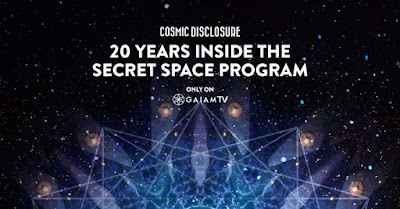 I am a sucker for Facebook and Internet postings that talk about "secret" programs. I always click, to see just what that secret is!

Most recently, I clicked on a posting that took me to the Gaia website. The link came as a "sponsored" posting on Facebook (meaning that it was a paid-for advertisement). What a revelation! I found, based on my click, that there is a group called the Sphere-Being Alliance that obviously believes that the United States government, following up on the initiatives of Nazi Germany, is now in contact with extraterrestrial beings. Based on these contacts, according to the Sphere-Being Alliance, the United States government has a "secret" space program.

I am, I must confess, extremely dubious that such a program actually exists! However, whether there is such a "secret" space program or not, some language I read on the Cosmic Disclosure website demands a response.

There are those who believe it is not humanity’s destiny to wither away within the clutches of Earth’s cycles of life and extinction. Rather we are to venture forth, beyond our terrestrial origins and establish thriving civilizations throughout the cosmos. Some have already secretly realized this vision, while others are relegated to technology dependent upon dwindling resources. A conflict now rages whether to preserve these advancements for the ranks of the elite, or to share this destiny with the whole of humanity and usher in a new era of peaceful conscious advancement. Tune into the ongoing, weekly series of Cosmic Disclosure as David Wilcock interviews insider Corey Goode about the details of Corey’s 20-year participation in the Secret Space Program.

As you can see, Cosmic Disclosure believes that the benefits of the secret space program (assuming, as they do, that such a program exists) should not be reserved for the "ranks of the elite." The people behind Cosmic Disclosure want the benefits of this program to be available to all. The ordinary people should not be consigned to the horrible fate of "withering away within the clutches of Earth's cycles of life and extinction." If the rich elites can avoid such a fate, then we all should be able to partake.

Since I am a Bernie Sanders supporter, you might think I would share the egalitarian perspective of the Cosmic Disclosure group. You would be wrong! While I strongly believe that Earth-bound benefits should not all be reserved for the "ranks of the elite," for those who populate what Sanders calls "the billionaire class," I want to make very clear that I do believe that it is humanity's destiny to "wither away within the clutches of Earth's cycles of life and extinction."

I do not believe that we are supposed to be trying to "venture forth, beyond our terrestrial origins." I believe that we should be building "thriving civilizations," and establishing a "new era of peaceful conscious advancement," right here on Planet Earth.

We are creatures who inhabit a World of Nature into which we have had the privilege of being born. The bottle of life that we get at the outset comes with a "recycling deposit," commonly known as "death," which is an inherent part of life itself, within the Earth's "cycles."

Attempts to escape Earth's cycles are misdirected. Ignoring the limits of the Natural World, which is our effort to escape these cycles, will lead to a planetary disaster.

IS leading to a planetary disaster.