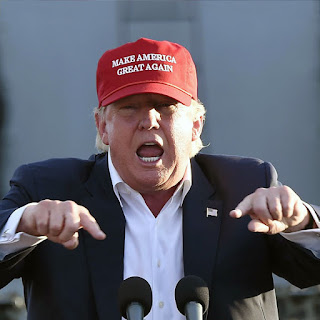 I am told by Google News that Donald Trump has just "rolled to another big victory" in the Republican Party primary in Arizona. It seems timely to give you some thoughts from Roger Berkowitz, the Academic Director of The Hannah Arendt Center For Politics and the Humanities at Bard College:

The Trump phenomenon may feed on racial tension, but it is not founded upon fascism, racism, or authoritarianism. Recognizing this is important because lazy criticism can be worse than the failure to criticize, as it only solidifies the sense of righteous anger in those are unfairly targeted. Calling Trump and his huge numbers of supporters racist or fascist may make a small group of intellectuals feel morally superior, but it will hardly convince those voters....

Distinctions and definitions are not arbitrary and they are important. First because we should all try to speak with a clarity that allows others to understand us. Second, distinctions allow us to speak with those with whom we don't agree. To call Trump a racist is to score points amongst your friends, pile up "Likes" and "Loves" on Facebook, and win Twitter followers. But it will not persuade those with whom one disagrees because it does not truthfully engage with their reality.

Politics, Hannah Arendt taught, is not about truth, it is about opinion. When Trump refuses to condemn violence or when his rhetoric is excessive, he should be called on it. When he makes up facts, he should be shamed. But too often the vitriol against Trump comes from a belief that his supporters have illegitimate beliefs. To delegitimize political beliefs with charges of racism and fascism is to drive a deeper wedge between the liberal and conservative elites who self-righteously condemn Trump and the bi-partisan working class Americans who have turned to Trump after decades of Republican and Democratic refusal to respond to their interests. The hope that a narcissistic deal-maker can save the country may be a shallow and desperate hope. But the worry that our political class is not up to the job is born from experience.

Berkowitz does believe that candidate Trump is a "narcissistic deal-maker," but I think he is right that labels don't advance debate. I think he is also right that Trump's political successes are founded on legitimate complaints about the failure of our federal government, and of our two main political parties.

Berkowitz' remarks were made in the weekly Amor Mundi newsletter published by The Hannah Arendt Center. While he clearly had his own points to make, Berkowitz mainly wanted to alert his readers to an analysis by Arthur Goldhammer, writing in The American Prospect. Goldhammer's article is titled, "Trump-l’Oeil," and its main point is that "at the heart of Trump's appeal is not authoritarianism but the cult of celebrity."

Let's get over the feeling that "celebrity" should not translate into political power. Citing Berkowitz again:

As Thomas Hobbes put it, "Reputation of power is power." Thanks to his reputation of power, Trump's ignorance of government, of foreign policy, of economics counts in his favor, because as Hobbes also said, knowledge "is small power," since the truths it contains are evident only to "such as in a good measure have attained it." Ignorance cloaked in celebrity appeals to the many, while knowledge, with its frustrating acknowledgment of difficulty and of incompatible goods, does not please crowds."

To combat the power of celebrity, we need to organize ourselves to deal with the legitimate complaints that candidate Trump is talking about. That means that our efforts at organization must be robust enough to generate an ability to hold elected officials accountable, including those of the Democratic persuasion.

If we are tricked into thinking that politics is about picking someone to "reign," to use a Trump-approved expression, celebrity will carry the day, and it will be a "bad day" when it does!