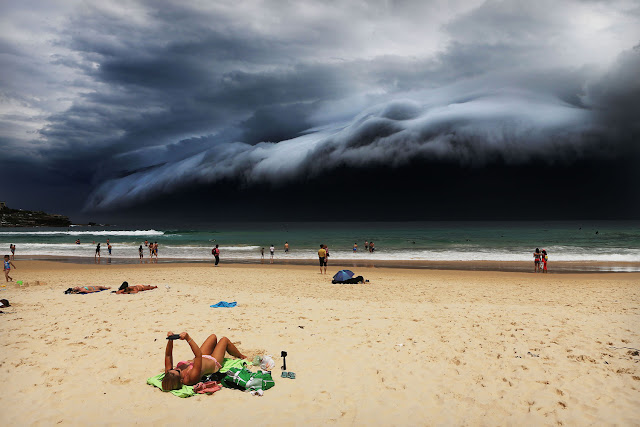 The photo above is the first prize winner in the "Nature" category, from a collection of the winning entries in the 59th annual World Press Photo Contest. You can click this link, and find this photo, and then make it full screen to get the full effect. 82,951 photos were submitted for judging, made by 5,775 photographers from 128 different countries. Winners in eight categories were announced, including Contemporary Issues, Daily Life, General News, Long-Term Projects, Nature, People, Sports, and Spot News.

World Press Photo was kind enough to allow The Atlantic to publish some of them, which is where I saw the photo above, titled “Storm Front on Bondi Beach.”

The photo depicts a massive "cloud tsunami" looming over Sydney, Australia, as a sunbather reads, oblivious to the approaching storm. The picture was taken on November 6, 2015.

Besides being a striking photo of the oncoming storm, on that day, and in that specific place, I think this photo powerfully conveys the situation in which all of our human civilization now finds itself.

We are enjoying the sunshine. We are oblivious.

Horrific events are on the way!