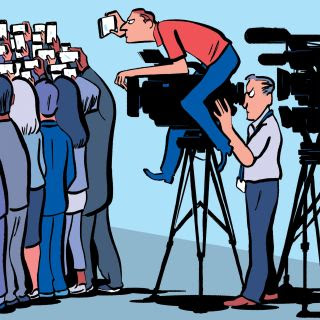 Jill Lepore, an historian and a writer for The New Yorker, takes on the party system in American politics, and asserts that our two-party system is a "creation of the press." You can read all about it in her article called, "The Party Crashers," which appeared in the February 22, 2016 edition of the magazine.

By Lepore's count, there have been six different "party systems" since 1796, when the Federalists (aligned with John Adams) and the Democratic-Republicans (aligned with Thomas Jefferson) hurled their bitter barbs back and forth in the hundreds of weekly newspapers that were the source of political information in the early days of the Republic.

It is Lepore's contention that changes to our party system, over time, have always occurred in connection with new information technologies or arrangements. She documents the various changes that have occurred to our political parties, and discusses how different ways to access political information have been associated with those changes. According to Lepore, we are probably just about to move into a seventh "party system," this one ushered in by the Internet, and this one, perhaps, ending up with the effective destruction of the kind of two-party system we have relied upon to structure our political decision-making.

"With our phones in our hands and our eyes on our phones," says Lepore, "each of us is a reporter, each a photographer, unedited and ill judged, chatting, snapping, tweeting, and posting, yikking and yakking. At some point, does each of us become a party of one?"

Lepore's article is premised, at least partly, on a play on the word "party." A party is the kind of organized political association that has guided our politics, one way or another, since the American Revolution, but a "party" is also a kind of celebration in which you aim to have a lot of fun. Hannah Arendt, my favorite political philosopher, has noted that the practice of politics was actually what the founding fathers had in mind when they stated that our inalienable rights included not only "life" and "liberty," but the "pursuit of happiness," too. Politics, in other words, was seen to be a source of personal joy and self-fulfillment.

If Lepore is right about where our modern information technologies may be taking us, we need to be careful. You can't really "crash" a party of one. And that "party of one" idea doesn't sound like it would be too much fun, either.

I think Lepore is giving us a clue that we had better get together, and not let the rampant individualism that has so completely transformed our contemporary world, and undermined all of our community institutions, destroy our politics, too.