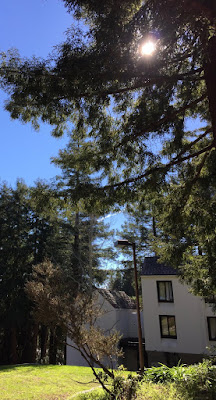 Seasonal Affective Disorder (SAD for short), is "a type of depression that is related to changes in seasons ... If you're like most people with SAD, your symptoms start in the fall and continue into the winter months, sapping your energy and making you feel moody." I am quoting, here, from the Mayo Clinic's online health information website.

There are lots of places online where you can find out more. Lack of sunshine is taken to be a major causative factor, and "treatment for SAD may include light therapy (phototherapy)."

The picture to the right, taken on the University of California, Santa Cruz campus on February 16th, at just about 11:30 a.m., documents how things looked right then, right in the heart of winter.

As I emerged from teaching my class on "Privacy, Technology, And Freedom," I felt the hot weather hit my face, and I want to self-report the terrific sense of sadness that overcame me. This is not how things should be, in February. In fact, when I checked, the average high temperature for February 16th, in Santa Cruz, has historically been 64.3 degrees. I didn't immediately check the temperature at 11:30 a.m.; however, the temperature was 74 degrees at 5:12 p.m. I think it was near 80 degrees at noon.

Our failure to heed the built-in limits of the Natural World, as we continue to act like the world we build doesn't have to pay attention to those limits, is putting human civilization, and the continued existence of many species (including redwood trees, so prominently visible on the UCSC campus) in mortal danger.

But this sadness isn't going to pass when winter turns to spring and summer. It's only going to get worse. 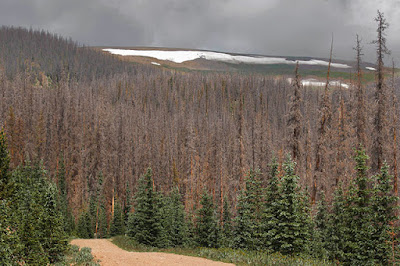