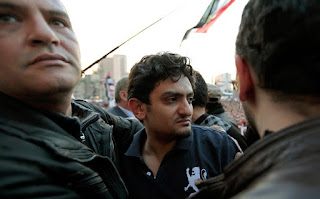 Thomas Friedman, columnist for The New York Times, has written a column saying that the Internet will not be able to create the kind of democratic political changes that are so hoped for, and that are so needed throughout the world (not even excepting the United States of America, in my estimation).

The focus of Friedman's column is not on the United States, but on the countries that experienced what is called the "Arab Spring." Friedman cites to the current thinking of Wael Ghonim, pictured at the center of the photograph above.

As Friedman explains, Ghonim was the "Egyptian Google employee whose anonymous Facebook page helped to launch the Tahrir Square revolution in early 2011 that toppled President Hosni Mubarak — but then failed to give birth to a true democratic alternative."

I am all for "civility and reasoned argument," too, but I don't think that this will drive democratic change either. I agree with another commentator on the Arab Spring, Zeynep Tufekci, who has her own TED talk on this subject. I agree with Alicia Garza, one of the co-founders of Black Lives Matter, who spoke at the Santa Cruz Civic Auditorium on Friday, February 12th, and who told the crowd that "we are not going to 'like' or 'share' our way to the kind of social changes we need."

Talking about it, and particularly talking about it with civility, as advised by Thomas Friedman, won't be enough. The Internet, however helpful, is also not going to be sufficient. If we want a politics responsive to real people and their real concerns, we are going to have to meet face to face, and get "down and dirty," and go from there.