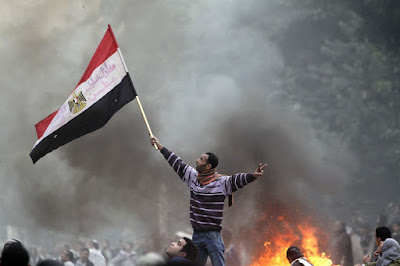 Amanda Taub writes for Vox.com. She identifies herself as "Senior Sadness Correspondent," and as a former human rights lawyer who now covers a news beat that includes "foreign policy, human rights, and shetland ponies."

I don't know how well Taub does with the shetland ponies topic, but I found her article on "The unsexy truth about why the Arab Spring failed" to be well worth reading. Click the link if you'd like to second guess my judgment.

The main point of Taub's article is her assertion that the democratic uprisings that constituted what is called the "Arab Spring" failed to create truly democratic governments because of the "catastrophic failure of institutions" within the countries that experienced those revolutionary moments:


Democratic transition, it turns out, isn’t about whom you can overthrow or whom you replace them with. It's about whether or how you can change the vast network of institutions underneath that person.

If you don't make those institutions work — and often, by the dictator's deliberate design, you simply can't — then your revolution is doomed. No matter how many times you topple the dictator, no matter how pure and good your protesters are, it won't be enough. That's the real lesson of the Arab Spring — and it's important precisely because it's not as exciting or emotionally satisfying as the good-versus-evil story we prefer to tell....

Many of Morsi's failures were self-inflicted, but even if he had been better at governing, the hollowness of Egypt's state would still have at least severely weakened and possibly doomed him. And so when Morsi faltered, the country's democratic transition collapsed. The military filled the void left by the rest of the state's failures.

It has often struck me that we think of our "institutions" as though they were were "things," existing separately from us, and from our actions. We assume that the word "institution" is always a noun. That is definitely the way that Taub employs it.

Hannah Arendt, for those who know her writings, insisted that genuine "revolutions" were always associated with "beginnings," and with our surprising ability to make some new thing appear out of nothing. In fact, a revolution is NOT defined by an overthrow of some existing order, however poorly propped on corrupted foundations; revolutions are defined precisely by the process of "institution," of making something new.

Taub's piece, it seems to me, understands the first thing quite well - revolutions are not about overthrowing those in current power - but she somewhat misunderstands how revolutions relate to institutions.

In the political world this kind of institution building means that we must, ourselves, constantly be engaged in the life of politics, renewing and rebuilding the institutions upon which our lives depend. My homely way of phrasing this, however lacking in "flash," I believe gets at the heart of how we can prevent our own institutions from being "hollowed out," as Taub says Egypt's were:

If we want to have self-government, then we have to be involved in government ourselves.