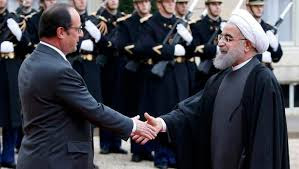 The photo above can be found on the website of CBS news. It also ran at the top of a news article printed in The Wall Street Journal on January 29, 2016. That Wall Street Journal article described the preliminary steps that Iran is taking toward leasing or buying commercial satellites and acquiring related technologies.

The photo depicts an American ally doing business with "the enemy."

Instead of bombing the people who live in that "enemy" country.

Presidential candidate Donald Trump can fulminate all he wants, but that is actually the way the world is supposed to be. We are all in the same world, together, so let's get along. Hey, even better, let's do business!

Let's give our thanks to President Barack Obama for the "Iran deal" that made this picture possible.

Let's stop the bombing in the Middle East.