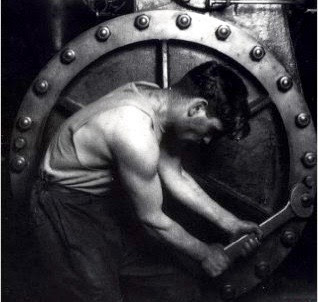 Hey! Why is everybody looking at me?

I know; I know! I have been accused!

Luckily, however, I do have friends on my own side. They stick up for me! They are probably obsessive-compulsive, too.

One of my friends sent me the following quote, from Primo Levi's book, The Monkey's Wrench:

If we can except those isolated and miraculous moments fate can bestow on a man, loving your work (unfortunately, the privilege of a few) represents the best, most concrete approximation of happiness on earth. But this is a truth that not many know. This boundless region, the region of le boulot, the job, il rusco - of daily work, in other words - is less known than the Antarctic, and through a sad and mysterious phenomenon it happens that the people who talk most, and loudest, about it are the very ones who have never traveled through it.

To exalt labor, in official ceremonies, an insidious rhetoric is displayed, based on the consideration that a eulogy or a medal costs much less than a pay raise, and they are also more fruitful. There also exists a rhetoric on the opposite side, however, not cynical, but profoundly stupid, which tends to denigrate labor, to depict it as base, as if labor, our own or others,’ were something we could do without, not only in Utopia, but here, today; as if anyone who knows how to work were, by definition, a servant, and as if, on the contrary, someone who doesn’t know how to work, or knows little, or doesn’t want to, were for that reason a free man.

It is sadly true that many jobs are not lovable, but it is harmful to come on to the field charged with preconceived hatred. He who does this sentences himself, for life, to hating not only work, but also himself and the world. We can and must fight to see that the fruit of labor remains in the hands of those who work, and that work does not turn into punishment; but love or, conversely, hatred of work is an inner, original heritage, which depends greatly on the story of the individual and less than is believed on the productive structures within which work is done.

Loving our work. Really! Let's try it out.

I'm not monkeying around.