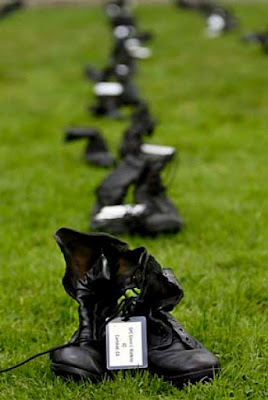 Last year, an Oregon eighth-grader was suspended from school for "wearing a T-shirt that depicted an empty pair of boots representing soldiers killed in action."

A report of this incident was included in a January 1, 2016 column by George Will, the reliably dyspeptic (and right-wing) columnist for The Washington Post. Will's column described a list of events occurring in 2015 that Will found "ludicrous," the common thread tying them all together being "the collapse of judgment in, and the infantilization of society by, government."

Will's characterization of the "meaning" of the occurrences he highlights is clearly subservient to his political ideology. That said, the incidents he lists, like kicking a student out of high school for wearing a "boots on the ground T-shirt," are all pretty deplorable.

Both left-wingers and right-wingers should be able to find common cause in a demand that our governmental institutions respect the First Amendment.

Looking ahead, the picture at column top might remind us all what putting "boots on the ground" really means. I have a feeing that we are going to be hearing a lot of candidates from Mr. Will's favorite political party calling for lots more of those boots on the ground, everywhere, during the upcoming year.