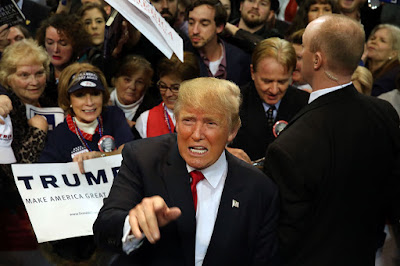 Political commentator Elizabeth Drew, writing in The New York Review of Books, contends that feelings of frustration and anger are a major driving force in Presidential politics at the present time. Drew's article is titled, "The New Politics of Frustration."

Since I had just watched a YouTube video of a major Trump presentation at a rally in Pensacola, Florida, before reading what Drew has to say, I was very much prepared to agree with Drew's observations. At the Pensacola event, Trump not only owned and admitted his anger, but "trumpeted" it, to the boisterous satisfaction of the crowd. I think Drew is correct, too, in indicating that the Bernie Sanders' candidacy is also significantly anger-based.

If you'd like to watch the Trump speech, which convinced me that he is an eminently serious candidate, and will be hard to beat, not only in the Republican primaries, but also in a general election, you can click right here. That click will not only take you to Trump's speech, it will give you an opportunity to experience the "Official Donald Trump Jam," as sung by the "USA Freedom Kids." They are actually called "Freedom Girls" in the publication notes for the YouTube video. To "go deep" on the "Trump Jam," feel free to click on this link for the lyrics.

I was tipped to Drew's article by a mention in Amor Mundi, the weekly blog published by the Hannah Arendt Center at Bard College. The comment in Amor Mundi, by Roger Berkowitz, Academic Director and Associate Professor of Politics, Philosophy, and Human rights at Bard, is a serious one:

What is missing, however [in the Drew article], is what Hannah Arendt once referred to as a "real analysis of the existing situation," a recognition of the uniqueness of our current situation and a new way forward. The candidates can't be faulted for the fact that they don't have solutions. Nobody seems to. But a politics of anger rarely blooms into a rose. A revolutionary situation, Arendt writes, "need not lead to revolution. For one thing, it can end in counterrevolution, the establishment of dictatorships, it can end in total anticlimax; it need not lead to anything." With the candidacies of Trump, Cruz, and Sanders, justifiable anger is raising the stakes in a dangerous game. Which is why Drew rightly concludes her essay with a warning: "The anger, fear, resentment, racism, and frustration that are playing into the current political climate make for a turbulent situation. This is a situation prone to undermining our democratic system. It's not an overstatement to say that in this political climate this election encourages a certain fascist strain. We're not there yet and our democratic impulses are strong. The disturbing thing is that that fascist tendency can even be glimpsed." 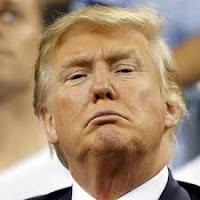 Mussolini and Trump. Trump's the one without the hat!