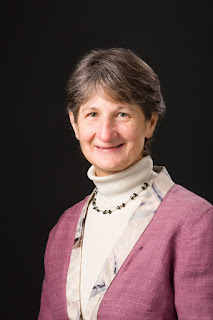 Debbie Humphries, pictured to the right, is a member of the Ithaca, New York Monthly Meeting of the Religious Society of Friends [Quakers], and has authored a Pendle Hill Pamphlet [Pendle Hill Pamphlet 436] that is titled, "Spreading the Fire," in which she discusses her ministry of "travel" to various Quaker meetings in New England and elsewhere.

"Traveling," of the kind undertaken by Humphries, is an old tradition among Quakers. Probably, the pamphlet will be of most interest to Quakers, though non-Quakers could certainly gain some understanding of "Quakerism" by reading it.

I am referencing Humphries' pamphlet here because in describing her experiences she quotes Northrop Frye, and specifically his article, "The Instruments of Mental Production."

What Frye says is worth passing on:

A life divided only between dull work and distracted play is not life but essentially a mere waiting for death, and war comes to such a society as a deliverance because it relieves the strain of waiting.

As the Quakers would say, this observation "speaks to our condition." At least, I think it does.

In a New Year, we should be searching for some other deliverance from a life that oscillates between "dull work and distracted play."