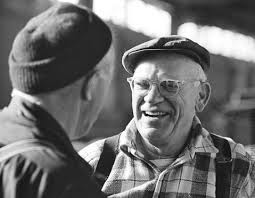 David Brooks regularly provides his services as an all-purpose pundit for The New York Times. In a recent column, Brooks gives a short summary of one of Eric Hoffer's wonderful books, The True Believer. Hoffer, who was called a "Longshoreman Philosopher," is pictured above.

Brooks' column appeared on December 8, 2015, and was titled, "How Radicals Are Made." It basically rehearses what Brooks thinks Hoffer would have said about this topic.

I had the very great fortune to meet with Eric Hoffer personally one time, and to hold a long conversation with him in the office he maintained at the University of California at Berkeley. I have read all his books. I think Brooks is basically right in what he says about Hoffer's views, but if you are intrigued by Brooks' quick report, I hope you'll go beyond what Brooks has to say, and track down the original book!

One of the attractions of a "mass movement," in other words, is its acknowledgement that we are not, in the end, mere individuals, who should care only for ourselves. We are part of something greater, and our purpose in life can really only be accomplished when our personal actions not only benefit us individually, but contribute to the greater whole of which we are a part.

The antidote to ISIS? A genuine political democracy in which individuals have an opportunity to be engaged in advancing a project and a hope that goes beyond the merely individual. To the degree that our political system has shown endurance and resilience, it is because we have had enough of such genuine political engagement to keep our society together. The fact that ISIS can recruit now, from within the public, here in the United States, indicates that our common endeavors have become unreal and unappealing to many ordinary men and women.

That's what the Longshoreman Philosopher would say. I'm pretty sure of that.