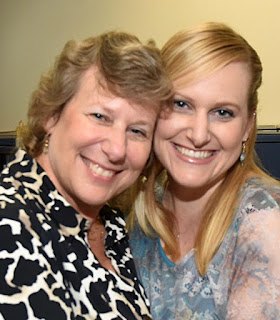 Terry Dorsey is pictured on the left. On the right is Terry's daughter, Nicole Carl.

Terry began working for the Santa Cruz County Board of Supervisors in early 1975 (I think initially on a six-month, temporary appointment). She retired last Friday, one week ago today, after forty years as the chief administrator of the Santa Cruz County Board of Supervisors. I actually don't know what her official title was at the time she retired. Suffice it to say that she ran the Board's offices (among other things).

During her forty-year tenure, Terry worked (successfully!!) with twenty-eight different Board Members. They did not always agree with, or work well with, each other, but without exception, they celebrated Terry, who worked well with them all. Wonder Woman has nothing on Terry!

It wouldn't have happened without Terry Dorsey.

I got to speak at Terry's retirement, but here is just one more salute to a person who has made the lives of the residents of Santa Cruz County better, for forty years, by helping to make sure that our local government has worked the way our local governments are supposed to.

We are "in this together," as I often say, and our local government is the mechanism by which we make collective decisions about what we want to do, and about how we want to marshall and spend our resources. Elected officials play a big role.

They are not the only ones.

My personal thanks to Terry Dorsey, with appreciation, admiration, and love!