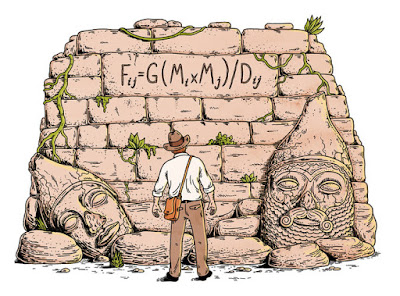 Not long after I wrote my blog posting for August 31st, I read an article about free trade in The New York Times Magazine. The article was fascinating, since it was based on trading records from the 30-year period between 1890 and 1860 B.C., about 4,000 years ago.

As the article explained, archaeologists have uncovered a comprehensive written archive of a few hundred traders who set up importing businesses in Kanesh, which sat roughly at the center of present-day Turkey. It turns out that trading then was pretty much the same as trading now. In fact, the records from Kanesh seem to provide a clear demonstration that a "law of trading," akin to the "Law of Gravity" in physics, actually describes how trading will, inevitably, work. Read the complete article, "The V.C.s of B.C.," to get all the details.

Since I had made some comments on the "free trade" topic in my earlier posting, noting that the supposed benefits of "free trade" were, in fact, actually captured only by persons inhabiting the very highest economic strata, I was gratified to find that my own prescription for how to deal with the inequities caused by "free trade" is perhaps not that far off the mark, and that a similar approach was actually utilized to control inequitable wealth capture by the leading trading families of Kanesh:

Despite trade’s intractability, we still have a lot of room to address the impact of trade on our economy. Trade with China and other nations may be all but inevitable, but growing wealth inequality and disproportionate pain (blue-collar workers losing their jobs, investors reaping a fortune) are not. There is much we can do within our borders to address the unequal impact of global trade. We can educate children for more competitive careers, train displaced workers for new industries or even directly compensate those who fail to benefit from global trade.

That, in fact, is what the people of Assur did, 4,000 years ago ... Trade brought enormous wealth to a dozen or so families. But rather than hold all of it for themselves, the wealthy were made to redistribute a high percentage of their earnings through taxes and religious foundations that used the money for the public good. This way, the wealth created by trading with Kanesh made nearly everybody — at least every free citizen — better off.

That means that those rich guys don't give it away voluntarily.