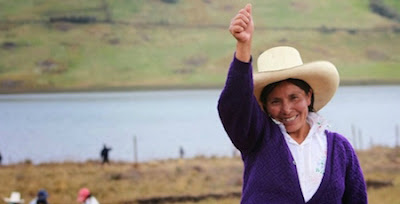 Read about Máxima Acuña de Chaupe, an indigenous peasant farmer who lives in the Andean highlands of northern Peru. Last December, she won a lawsuit filed against her by the owners of the Yanacocha open pit gold mine, owned by the Denver-based mining company Newmont.

The Newmont website proclaims, "the health and safety of our people is more precious than the metals we mine."

Considering the experiences that Máxima had, it is obvious that the emphasis in that statement is on the word "our," and the Newmont corporation doesn't think that Máxima and her family qualify for inclusion.

The latest edition of Earthworks Journal, published by the nonprofit organization Earthworks, tells the story of Máxima's struggles with Newmont.

Máxima fought Newmont to stop a mining proposal that would not only have taken her land, but would also have permanently altered the watershed and ecosystem of the mountainous region where she lives, polluting the water with arsenic and heavy metals, and threatening the health of thousands of people and their livestock. Because she opposed this proposed mining project, Máxima suffered physical beatings and harassment, besides the lawsuit.

This is the story of one person, standing up to corporate power on behalf of herself, her community, and the natural world.

And thanks to Earthworks for making Máxima's story known.