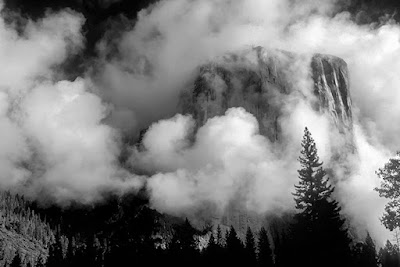 The farther reason looks the greater is the haze in which it loses itself.

This quote, and the picture of Yosemite, came to me on August 21, 2015, as one of the email messages called a "Daily Ray of Hope," distributed by the Sierra Club. If you would like to sign up to receive these "Daily Ray of Hope" messages and photographs (they're free), then click right here. The motto of the Sierra Club is to "explore, enjoy, and protect the planet."

As for Johann Georg Hamann, I have to confess I had never heard of him until I received that Daily Ray of Hope.

According to the Stanford Encyclopedia of Philosophy, Hamann's dates are 1730 - 1788. He was not an "academic" philosopher, but "was respected in his time for his scholarship and breadth of learning. His writings were notorious even in his own time for the challenges they threw down to the reader."

Among other things, Hamann had some rather provocative views on sexuality (click right here for the full discussion), and the Stanford Encyclopedia says this about his views on the nature of humanity:

The theme of interdependence between human beings, which was emphasized in his epistemology, also has its roots in his understanding of what it is to be human. We are not self-sufficient; but for Hamann, even our lacks and failings have a positive thrust, this signifier of dependency making us all the more suited for the enjoyment of nature and one another.

My version of what Hamman is saying is probably never going to make it into the Stanford Encyclopedia of Philosophy, but I think this formulation captures the essence of what Hamann is propounding:

We are all in this together!