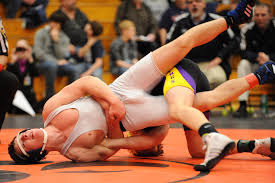 I actually participated (for a very short time) in high school wrestling. I didn't like it, and I wasn't very good at it (not necessarily in that order).

Having been on the mat in a combatant role, however briefly, I remember this one thing about wrestling: just when you think you have either won, or lost, some little slip or change reverses the polarity of dominance, and the person on the top is quickly on the bottom. And vice versa.

I thought about this when I read a news story in The New York Times, published in the Sunday, August 16, 2015 paper. In the print edition, the story was headlined, "Criticism Aside, G.O.P. Is Vague On Use of Power." The article was an exploration of how the current (large) crop of candidates for the Republican Party presidential nomination might wield American military power, in the context of continuing international conflict.

Would the candidates favor military force, with diplomatic backup, or would they opt for putting the main burden on diplomacy, with military force as the backup (apparently the preferred priority for President Obama, given his negotiation of a treaty with Iran on nuclear weapons development)? The article confirms what The Times' headline says; the candidates are "vague" about what they would actually do as President.

There was, though, according to The Times, complete agreement on one thing: "If only the United States were stronger, and more feared, the country would not feel threatened by the Islamic State, manipulated by Iran or challenged by a rising China."

More military power, more ability to make others afraid! That's the principle that the Republicans advocate. The stronger nation dominates, so achieving such domination is clearly the way to go!

It works that way in wrestling, too. Dominance dominates. Until, suddenly, it doesn't.

There is no doubt that this is a dangerous world, and that immediate and unilateral military disarmament is probably not a good idea.

But for the long run, based on my experience with wrestling and other combative experiences, we ought to be seeking ways to build world stability (even "peace") on strategies of collaboration, as opposed to pursuing military domination as our route to a safer world.

If we don't get out of the ring, we'll end up on the bottom. Sometime. Probably when we least expect it.

That's just how it works in the world of combat.