#221 / The Passionate Intensity Of The Top Ten 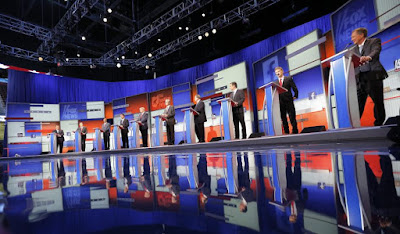 I was not planning to watch the debate held between the top ten candidates for the Republican Party Presidential nomination. That debate took place on Thursday evening, August 6th. I got sucked in.

I found myself almost mesmerized by the candidates and their very incisive responses to the difficult questions thrown at them by the Fox News commentators. I thought the debate was well staged. It commanded my attention.

I couldn't turn away, although I wanted to. I thought it was appalling.

What struck me most was the energy and the profound enthusiasm shown by both candidates and members of the audience for sentiments that included the desirability of going to war in the Middle East, and the idea that it was right to let women die rather than to perform an abortion that might be called for because the mother's life was in danger. Such sentiments truly sparkled with electricity on the red, white, and blue Fox News stage.

I was appalled, and I remembered Yeats.

That debate reminded me so much of The Second Coming:

Mere anarchy is loosed upon the world,

The blood-dimmed tide is loosed, and everywhere

The ceremony of innocence is drowned;

The best lack all conviction, while the worst

Are full of passionate intensity.