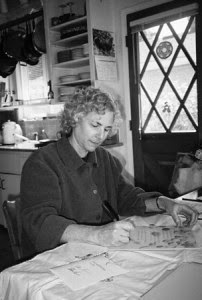 In yesterday's posting, I identified the empathetic and mutual support that can be found in small groups as an essential necessity for effective political action.

My reflection on this topic was sparked by The Wall Street Journal's obituary of Jean Nidetch, one of the co-founders of Weight Watchers. But the fact that the word "empathy" was used to describe the "secret" of the Weight Watchers' program made me think about "empathy" in more general terms.

Thinking about empathy, I was reminded of an Ellen Bass poem that I recently read. A blessing to read it. It would be hard to find a better way to make "empathy" come alive, though Bass never uses the word in this masterful portrayal of human compassion:

What if you knew you’d be the last
to touch someone?
If you were taking tickets, for example,
at the theater, tearing them,
giving back the ragged stubs,
you might take care to touch that palm,
brush your fingertips
along the lifeline’s crease.

When a man pulls his wheeled suitcase
too slowly through the airport, when
the car in front of me doesn’t signal,
when the clerk at the pharmacy
won’t say Thank you, I don’t remember
they’re going to die.

A friend told me she’d been with her aunt.
they’d just had lunch and the waiter,
a young gay man with plum black eyes,
joked as he served the coffee, kissed
her aunt’s powdered cheek when they left.
Then they walked half a block and her aunt
dropped dead on the sidewalk.

How close does the dragon’s spume
have to come? How wide does the crack
in heaven have to split?
What would people look like
if we could see them as they are,
soaked in honey, stung and swollen,
reckless, pinned against time?