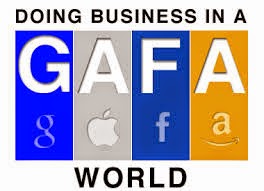 Joe Nocera asks the question, "Have you heard the term Gafa yet?" Nocera, who writes a column for The New York Times, bets you haven't. He also predicts that the term will probably not really "catch on" in the United States. You can read what Nocera has to say on this topic by clicking this link.

According to Nocera's column, which ran in The Times on Tuesday, April 28th, use of the term "Gafa" is big in Europe. "Gafa" stands for "Google, Apple, Facebook, and Amazon," and and the term "Gafa" conveys the growing economic domination of these huge, American-based high-tech firms. One European columnist, quoted by Nocera, says that Gafa firms "encapsulate America's evil Internet empire."

Worries about Gafa in Europe seem largely to be worries about the economic independence of the various nations in Europe, considering the growing economic dominance of Gafa.

But I think the United States has a Gafa problem, too.

I am currently teaching a course in the Legal Studies program at the University of California at Santa Cruz called "Privacy, Technology, and Freedom." The students in the course are studying governmental intrusions on individual privacy and freedom, and the impacts on privacy and freedom of "Gafa," and similar high-technology firms.

We have problems in both areas, but in the arena of governmental abuses (made clear by the document releases of Edward Snowden), we at least have various Constitutional rights that provide tools to counteract governmental spying and personal profiling.

When we press the "I Accept" button, and are thus cleared to use whatever Internet services we may be trying to employ, our "rights" are at that moment limited to those spelled out in the agreement we just approved, and that most of us never even read. Frankly, reading these agreements doesn't really do anyone much good, since our choice is to accept the terms of the agreement as presented by the provider, or not to use the service at all. More and more, that may not actually be a realistic choice.

It is becoming virtually impossible to participate in modern life without an almost constant access to the Internet, so our practical choice, at the present time, is to surrender whatever privacy the companies want to take from us, or (on the other hand) simply not to have access to any of the programs that provide us our functional connection to civic society.

As I have been telling the students in my class, it doesn't have to be that way. We can achieve actual privacy protections that will be of significant benefit to us, vis a vis Gafa and similar firms, but we can't do that through individual negotiations. We need to do it collectively, by legislation.

So, Americans have a Gafa problem, too. And the solution to that problem...