#124 / The President's Authority To Keep On Killing 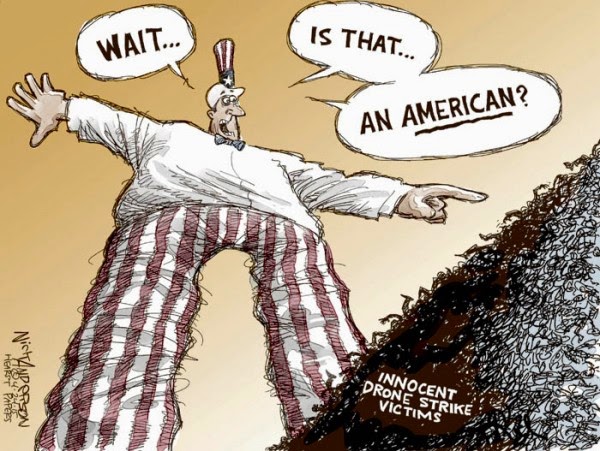 A week or so ago, the President apologized. For killing an American with a drone strike, I mean. And also for killing an Italian. Italy is one of those "Coalition Partners" that have a special place in our current law.

As observers have noted, the President has not yet apologized for killing thousands of other people, many of whom have not been actual terrorists. Women and children come to mind. And American and Italian hostages. But the President has apologized for those killings (just not for killing the women and children)! Click the link to see a visual presentation of just how many other people the United States has killed using drone strikes: 3,213 people in Pakistan (just to get you to the bottom line quickly).

Let's go back to "current law." There are a couple of laws that purportedly authorize the President of the United States to determine (on his own) who to kill. Drone strikes are one methodology by which the President can do the killing he determines is appropriate and necessary, but he is not limited to drones. No specific methods are outlined.

Let's first examine the AUMF, an "Authorization to Use Military Force" against terrorists. This authorization is contained in a law passed by the United States Congress on September 18, 2001. The AUMF provides as follows:

This is pretty straightforward, and actually pretty understandable. While the "he determines" language gives the President wide discretion (no kind of judicial or other review procedures are required), the President's targets are a strictly limited universe of "nations, organizations, or persons."

To be able to place a nation, organization, or person on the "kill list," the President must first determine that the specified nation, organization, or person took some action in the past that directly led, in some way, to the terrorist acts of September 11, 2001. This AUMF was, of course, enacted during the Presidency of George W. Bush, exactly one week after the events of 9/11. Given the timing, and the horror of the 9/11 attacks, it is understandable that Congress would provide the President with this kind of authority to "go out and get them," and to "hunt them down and kill them." The AUMF is intended to result in prompt and severe punishment for all those who contributed to the attacks that occurred on September 11, 2001. Notice that there is no authority granted to go after nations, organizations, or people who were not involved in 9/11.

Let's now check what has happened since then, in terms of the kind of "go out and kill them" authority that the Congress has provided to the President. In December 2011, about ten years after 9/11, the Congress updated and expanded the President's "kill list" authority in the National Defense Authorization Act of 2012 (NDAA). Section 1201 of that law references the AUMF, which is not superseded or repealed. In fact, Section 1201(a) of the NDAA makes clear that the authority provided to the President under the AUMF includes the authority to "detain covered persons," as well as to kill them. But mind you, under the more recent NDAA, the President is not restricted to detention; he can still kill those "covered persons" if he wants to.

So, who are the "covered persons" under the NDAA? Surely, we are still talking about the "nations, organizations, or persons" who participated in some way (past tense) in the 9/11 attacks; right?

Well, yes! But not exclusively. Section 1201(b)(1) refreshes the President's authority to go out and kill (or detain) those folks responsible for 9/11, though it's worth noting that the authority is now granted as to "persons," with no specific mention of "nations" or "organizations." But Section 1201(b)(2) goes beyond the former law, and extends the President's authority to the following:

A[ny] person who was a part of or substantially supported al-Qaeda, the Taliban, or associated forces that are engaged [present tense] in hostilities against the United States or its coalition partners, including any person who has committed a belligerent act or has directly supported such hostilities in aid of such enemy forces.

The 2001 AUMF uses the past tense. In other words, those persons eligible for the President's "kill list," or detention, are persons who acted in the past to bring about the 9/11 attacks.

No so for the authority provided in the NDAA of 2012. "Covered persons" (and again it is "persons" who are mentioned, not "nations" or "organizations") includes those who have "substantially supported" the "forces" that are (present tense) engaged in hostilities against the United States or [any] of its "coalition partners."

Check out that "coalition partners" list. Italy is one of those "coalition partners," but so are a long list of other countries. In fact, the NDAA authority lets the President detain or kill "persons" whom he determines are "substantially supporting" forces that are acting against what the United States or any of its coalition partners are doing, anywhere in the world.

Present, not just past, conduct is enough to bring down the wrath of the drones. No reason to apologize to those women and children killed in drone attacks, because they were obviously hanging around the places where the "bad guys" were found, and if that doesn't sound like "substantial support" what does?

Lawyers advising clients always give them the "worst case" scenario. So what is the worst case for you and me? The President can make an individual determination that you or I are providing "substantial support" to one of the forces that is opposing the United States or its "partners," and that means he can kill or detain us, without any judicial or other review, or other accountability of any kind. Unless that law is unconstitutional, of course.

Well, is that law unconstitutional? In the case of Hedges v. Obama, which raised that specific question, the United States Court of Appeals for the Second Circuit declined to make a decision on the constitutionality of the NDAA. The Court said that Mr. Hedges didn't have "standing to sue," observing that the "standing" doctrine is intended to "prevent the judicial process from being used to usurp the powers of the political branches."

The courts, in other words, deferred to the Congress.

And what did the Congress do? Some in the Congress thought that the NDAA "provided new authority to the President to detain American citizens indefinitely..." Senator Feinstein initially tried to get the Senate to adopt a specific statement that this was not correct, and that the NDAA did not extend the President's authority in this way. However, that proposed amendment did not pass. So, Senator Feinstein put forth a "second proposal," and this was her statement:

So our purpose in the second amendment...is essentially to declare a truce ... and this bill does not endorse either side's interpretation, but leaves it to the courts to decide."

The courts defer to the Congress. The Congress defers to the courts.

We are more or less stuck with what the President "determines."

Makes who President is a pretty critical question. Think about that in November 2016!