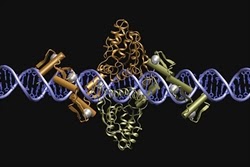 Dr. Jennifer A. Doudna, pictured below, is the inventor of a new genome-editing technique. In an article that appeared in the March 20, 2015 edition of The New York Times, and headlined "Scientists Seek Ban on Method of Making Gene-Edited Babies," Dr. Doudna is advising against using the technique anytime soon. She is not alone in worrying about the use of these germline modifications.

Dr. Doudna's invention is the "next step" after the gene modification techniques I have already mentioned, earlier this year, and while the article does describe the new technique as an "invention," I would actually think it might better be called a "discovery." By calling her technique an "invention," I suppose, Dr. Doudna may well be attempting to secure an opportunity to patent it. 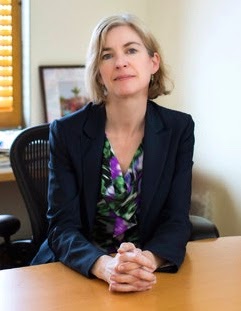 In essence, Dr. Doudna's technique allows human beings to modify the human germline and by doing so to "take control of our genetic destiny." According to the article, the new technique is "so effective and easy to use that some physicians may push ahead before its safety can be assessed."

"Safety," of course, is an issue. The article quotes scientists, including Dr. Doudna, who believe that safety concerns should be addressed by taking a "precautionary" approach. Once the human germline is modified in any specific individual, the changed genetic character of that individual can be transmitted to future generations. The single individual whose germline is modified, in other words, is not the only party affected. In fact, the entire future of the human race is affected.

In that situation, whether or not the technique should be used is definitely a "safety" issue. The nature of who we are, as human beings, is even more at issue.

The Two Worlds "hypothesis" that I am exploring in this series of blog postings suggests that human beings create a "human world," which is the world we most immediately inhabit, and that this "human world" is constructed within a preexisting Natural World that human beings did not create. We ourselves, as biological entities, are part of that Natural World, and we are thus subject to its requirements. The invention of Dr. Doudna would allow us fundamentally to alter that situation, and thus to "create" humans the way we might create a new type of architecture or a new social rule.

There are many who have no qualms at this prospect. The idea that human beings should themselves be in charge of creating the human race seems reasonable to them.

The Natural World we inhabit, however it came into existence, is wondrous, and marvelous, and complex. This Natural World, a world that preexists our own creations, is a world we are privileged to inhabit.

Our human role, within that World of Nature, is not to believe that we can do it better.

At least, that's what I think.