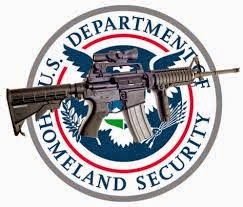 An editorial in the San Francisco Chronicle on February 17th contained a statistic that was surprising to me. Talking about the Department of Homeland Security, The Chronicle said it was "the government’s largest agency, with 240,000 employees."

Don't you think that is a surprising statistic? I had no idea!

DHS is our "fear fighting" agency, and we have more people deployed in our fight against fear than in any positive enterprise.

Just possibly this is an evidence of misplaced priorities!

Not everyone, of course, is concerned about the increasing domination of all levels of government by military-type agencies whose job it is to fight our most fearsome terrors.

But I am such a person. I don't think it bodes well.

In New York City, where several police officers were videotaped as they killed a man by applying a prohibited chokehold, even as he gasped out to them, "I can't breathe," a new 350-officer unit has been tasked with guarding the city against threats. Eric Garner, the man who was killed, and who was approached by the police because they believed he was illegally selling unpackaged cigarettes, or "loosies," is probably not the threat the City is thinking about.

But what is the threat the City is thinking about?

According to New York City Police Commissioner Bill Bratton, the new Strategic Response Group is "designed for dealing with events like our recent protests, or incidents like Mumbai or what just happened in Paris.”

There were large protests in New York City after Eric Garner was killed by the police. They were nonviolent protests. Do protests like that seem to be the kind of threat we need to prepare against with highly-armed military-style "response groups?" The New York City police seem to think so, but I join Tom Engelhardt in thinking that our cities probably don't need to invest in military-type preparations to defend us against protests and potential terrorist incidents. In fact, we're just throwing money at fear, and the result won't be good.

Not only will such military responses not eliminate potential terrorist incidents, such preparations are likely actually to stimulate such incidents. At least, that's my belief, anyway.

And such military response preparations are almost certainly going to be used against democratic, nonviolent protests. The New York City Police commissioner let that out of the bag. The very first "threat" that his new Strategic Response Group will be poised to confront will be "protests."

It's not just the big cities, either. Don't worry, Santa Cruz, the police are on the job, here, too. Thanks to the Santa Cruz City Council, the local police now have the "BEARCAT!"

I am teaching a course called "Technology, Privacy, and Freedom" at UCSC. One of the students in the class is quoting Benjamin Franklin in her paper. Ben gets it right:

Those who surrender freedom for security will not have, nor do they deserve, either one.