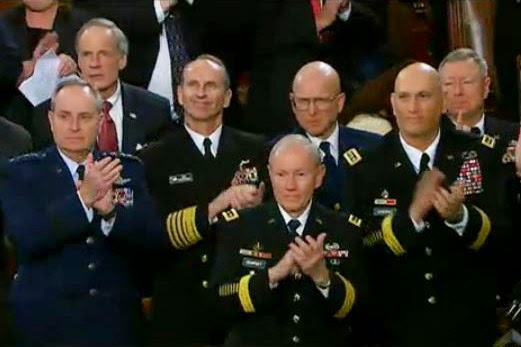 We know (or we should know) that President Obama is currently directing the Armed Forces of the United States to prosecute a war in Syria that has not been sanctioned by Congress, such military actions thus being carried out in apparent contradiction to the requirements imposed by the United States Constitution.

To be fair, the President does claim that past Congressional actions authorizing military activities in Afghanistan and Iraq justify the current U.S. actions in Syria. But most people think that this is a pretty weak claim, constitutionally speaking. At least some in Congress are attempting to deal with the situation, and an editorial in the Sunday, February 1, 2015 edition of The New York Times, titled "Retroactively Authorizing War," comments on the serious issues involved in the debate. It is an editorial worth reading.

Particularly worth reading (and thinking about) is the suggestion of General Martin Dempsey, Chairman of the Joint Chiefs of Staff. He is pictured above, front and center, along with his colleagues. Dempsey points out that the situation in which the President currently finds himself (directing a war unauthorized by Congress, in defiance of the Constitution) could be easily remedied. His proposed solution?

According to The Times, General Dempsey is "pushing for a timeless war authorization."

Oh, that would do it, alright!

Let's have Congress declare we are in a "timeless war!" Unfortunately, this characterization seems all too descriptive of the reality of our never-ending and ever-expanding military adventurism. Query, however, whether we should make this situation our national policy.

Authorizing a "timeless war," in my mind, is not a very good idea!