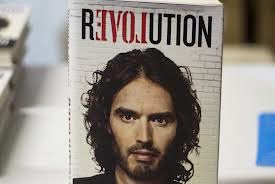 British actor Russell Brand seems serious about revolution. He has written a whole book about it (pictured above). As I have previously noted, not all the reviews of Brand's book are laudatory, but there are a couple of things in the book I particularly liked.

First, I like the principles that Brand has identified as the "Pillars of Revolution." Creating "autonomous organizations to perform necessary social functions that are not motivated by profit" is the first item on his list. Then, Brand lists equality, nonviolence, and ecological responsibility. That is a pretty good set of revolutionary principles, from my point of view.

I note that Brand's first listed item seems to echo quite accurately what Hannah Arendt has said in her book, On Revolution. Revolutions always begin, according to Arendt, when small groups of people come together and spontaneously take responsibility for the tasks of self-government. In the American Revolution, these were the Committees of Correspondence. In the French Revolution, they were the Communes. In the Russian Revolution, these groups were called the "Soviets," small groups of workers, based in the factories, which asserted worker democracy over what Marx called "the means of production." The slogan that came to be the rallying cry of the Russian Revolution, "All Power to the Soviets," celebrated these small, autonomous groups as the basis upon which a new social and economic order should be built.

What I most like about Brand's book, though, is the exuberance with which he addresses the fundamental reality that makes revolution necessary (and, as he claims, inevitable). Brand is the person who is pointing out the Emperor has no clothes, and he is being rather boisterous about this observation, too. Everyone knows, Brand says, that our system is corrupt, and that there is no way to resuscitate it from within the existing system. A new start must be made.

In fact, that's the kind of revolutionary realization that must prevail, if real actions to make fundamental changes in economic and political power are ever going to have a chance of success.