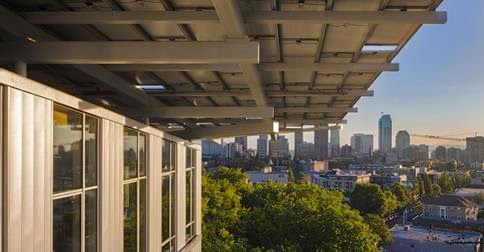 On Friday, September 26th, NPR ran a story by Adam Frank titled "Is Civilization Natural?" If you would like to hear the broadcast, click right here. You can also use this link to read Frank's short essay on the topic.

Frank begins his essay this way:

There's the city and then there's the country, the built environment and the wilderness, nature and civilization. Whatever name the dichotomy goes by, we usually think of the world humans create and the world outside their creations as separate and unequal.

In fact, my "Two Worlds" way of thinking about reality posits the dichotomy, but with an important difference. There is a world that humans create, and then there is a world "outside their creation." But I don't think of these as "separate" worlds, since the "human world" is contained within and is ultimately dependent on the World of Nature. At least, that's the way I see it.

The point of Frank's article, starting with a presumption of "separate but unequal worlds," is that the human world needs to take more account of nature:

Cities will need to become far more responsive to what used to be thought of as nature lying outside their domains. It means recognizing how deeply the city relies on natural systems and thinking creatively about working with those systems rather than paving everything over.

There are, for example, ideas about edging coastal cities with wetlands for storm surge protection. Then there is urban farming — including their most radical version, the vertical skyscraper farm. Whether these ideas can work or not, each is an attempt to rethink how the natural world appears within and serves urban spaces.

One concrete strategy for addressing this issue of sustainability and resilience is to make cities act more like nature. Think about how forests get everything they need from whatever moves through where they stand. Building cities that use this principle is called biomimicry — and it means bringing more of the services nature provides to the city back within its confines.

I definitely agree with Frank that the human world needs to take more account of nature, and I agree with Frank's suggestion that we bring "more of the services nature provides to the city back within its confines." I am nervous, though, about where Frank's thinking ends up. Here's the conclusion to his essay:

There will always be a day-to-day distinction between living in urban spaces and getting away into nature. But as far as our civilization building goes, we need to go beyond the old distinctions. With the dawning of the Anthropocene we've become a true planetary species. That's what gets the astronomer in me really interested. With all our city building, it's the entire planet that we're changing now. And once we get to that scale, the distinction between nature and not-nature has to get updated. We need a perspective that's more sustainable and more resilient if we're going to make it for another 100, 500 or 5,000 years.

Is Frank suggesting that human beings take ever more responsibility for "natural" processes? Frank says that our human actions are now affecting the entire planet, which is certainly true, and Frank suggests that this means that the "distinction between nature and not-nature has to get updated."

Does this mean that we need to start making "nature" do what "not nature" demands? That is one way of understanding what Frank is saying.

I hope that is not his thought.

In my view, it is now obvious that "not nature" is having profound impacts on "nature," and that this means that we need to stop the growth of "not nature," because if the "Two Worlds" aren't "separate," and our human world depends on the World of Nature, a failure to curb the continued growth of "our" world will ultimately destroy, within the World of Nature, the conditions upon which our civilizations depend.

Is Civilization Natural? No, civilization is the "not natural" that Frank talks about, and we had better recognize that our failure to understand our radical dependence on the World of Nature will mean the end to that "not natural" world.

Bob Dylan, by the way, has some thoughts on the subject.