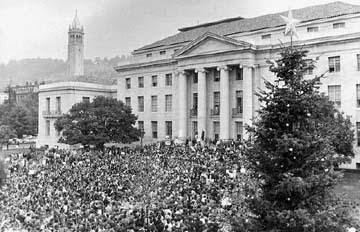 Besides its excellent review of Naomi Klein's new book, last Sunday's San Francisco Chronicle ran a big story on the Free Speech Movement, reporting on various 50th Anniversary events that will be taking place through December.

Robert Hurwitt, who wrote the Chronicle story, is the paper's theater critic. There is some justification for seeing the Free Speech Movement as a "drama," and to credit it with both dramatizing and catalyzing the need for a fundamental change in the direction of our society. In fact, it appears that Hurwitt got the assignment because, as he reveals in the article, he was one of the "Berkeley activists" who went from on-campus protesting to working against the Vietnam War.

Students today are shackled with debt and with a felt, almost frantic need to be able to survive economically when they graduate from school. One doesn't sense much "revolutionary potential" in campus visits today.

Perhaps not, but genuine revolutions are always "surprises," and are by definition not predictable, not mere extrapolations of ongoing activities. Will there be another time like that one, now fifty years past? I was there (at Stanford, of course, more "gentile" than Berkeley, but I traveled there to Berkeley to see, to be inspired and infected), and students everywhere, even those from Stanford, were galvanized into life-transforming action by the FSM.

I may not be the only one who is disgusted by the odiousness of our corrupted politics, and by the destructiveness of our collective behaviors. Maybe you, too? Maybe many more.

We may be surprised (again) by our willingness and ability to change the world! 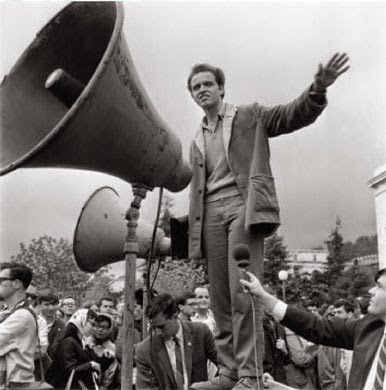